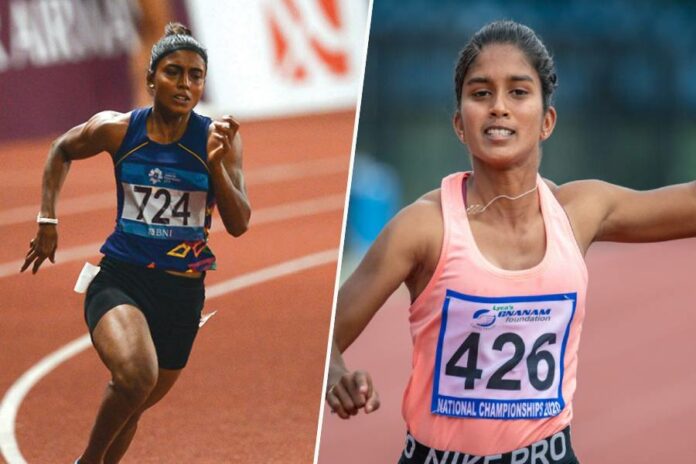 The second stage of selection trials for the Hangzhou Asian Games 2022 are now underway at the Diyagama Mahinda Rajapakse Stadium, and we’ve got the initial results of the Games for you!

The morning started with the Men’s and Women’s 10k, 5k and 1500m events. M U Kumara kicked off the Games with a win in the men’s 10k and Sri Lanka Army’s Madushani Herath grabbed first place in the Women’s 5000m.

With a notable absence from superstar Gayanthika Abeyratne, M A Kumari grabbed the Women’s 1500m top spot while Sanjeewa Lakmal came first in the Men’s.

The heats of the 100m and 400m took place in the morning session today, with Amasha De Silva winning heat 1 and her counterparts Safan Mohamed and Chamod Yodhasinghe remaining on top in the men’s 100m heats and booked themselves all spots in the final. Rumeshika Rathnayak, Medhani Jayamanne and Dulyana Suludagoda also advanced to the final.

Young Tharushi Karunaratne won big this morning with a 54.36sec in the Women’s 400m heats to achieve the qualification standard to the upcoming World Junior Athletics Championship. The other Women’s heats were won by the fierce Nadeesha Ramanayake and Dishli Kumarasinghe who averaged well in timing and will run the final this evening.

In the Men’s Javelin Throw Sumedha Ranasinghe won Gold as expected with 81.79m.

The evening session brought alive an array of finals in both field and track events, including the 100m and 400m finals.

The finals of the 100m women’s event were a true treat to the eye as Rumeshika and Amasha went head-to-head for a photo finish with the former inching forward by a sliver. Chamod Yodhasinghe won the Men’s 100m over Mohamed Safan who finished 3rd 10.94sec.

Tharushi Karunaratne, the young star finished 1st ahead of Nadeesha Ramanayake in the final, with a time of 54.29sec. Dilshi Kumarasinghe did not participate in the finals even though she won her heat rightfully and the reasoning is still unknown.

Aruna Darshana won the Men’s event with a time of 46.37sec leaving Sithum Jayasundara to finish second with a time of 47.33sec. The 4x100m relays were not held due to damaged tracks, and the day’s schedule ended.

Tomorrow is the second and final day of the trials and ThePapare.com will bring Photos, Videos and results from Diyagama!