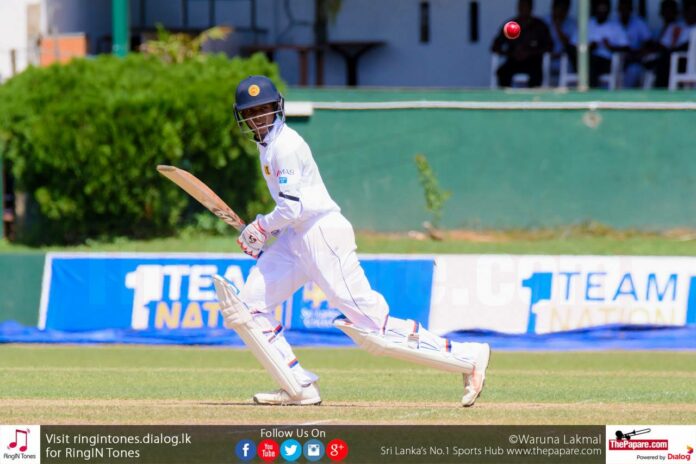 Nipun Dananjaya and Manelker de Silva began the day for the visitors aiming to provide a solid start. But Manelker departed just in the 4th over of the day for 17.

Dunith Wellalage walked out to bat next and the 2 former Sri Lanka Under 19 captains managed to stablize the visitors by carrying them over the 300 mark.

Dananjaya who batted phenomenally well since he came to the middle reached his 2nd first class century, a knock which his team and he himself needed really badly. His partner Wellalage who fell short of a half century in the previous encounter, unfortunately missed the milestone once again when he was dismissed for 46.

With the arrival of Yasiru Rodrigo, Dananjaya decided to shift gears as the SL Emerging’s total crossed 350. Shortly after Yasiru Rodrigo fell victim to Amar Virdi and with 1 wicket left, captain Dananjaya managed to get to his first 150 in first class cricket. With this milestone Sri Lanka Emerging XI declared on 372/9 after batting for 102 overs. For Surrey, Tom Lawes and Amar Virdi took 3 wickets each.

Surrey openers Ryan Patel and Ben Geddes began the reply for Surrey; the Emerging bowlers struggled to put pressure on the pair as the duo punished them without any mercy.

The visiting captain Dananjaya used 7 bowling options but none of them managed to bring a breakthrough for him as Surrey cruised to 196 in 57 overs at the end of day’s play. Ryan Patel who scored his 3rd FC century was unbeaten on a career high score of 109 while his partner Ben Geddes was on 75.

The 3rd Day of this encounter will begin at 3.30PM Sri Lanka time on the 22nd of May.