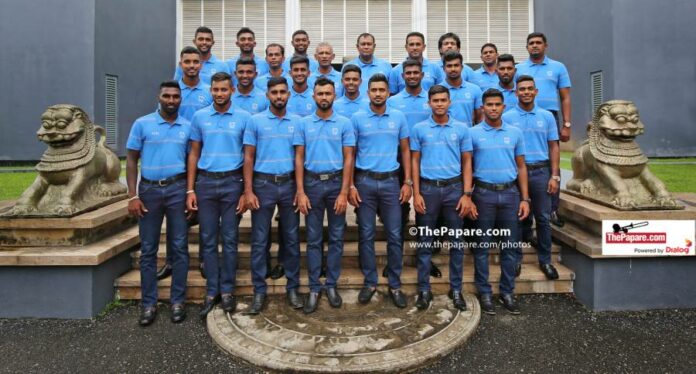 An 18-member Sri Lankan Men’s Emerging squad left the island for England on the 1st of May to play three four-day matches followed by three T20 encounters.

Nipun Dananjaya, the former Sri Lanka U19 skipper who will lead the four-day team, feels this is a great opportunity for the youngsters to gain experience by playing in England as they continue to grow for bigger roles in the international arena.

“Playing in England in this juncture of our careers will do a world of good for our future. As a captain, I’m very happy about this team and for this opportunity.”  Red-ball captain Dananjaya said before leaving the island.

Dhananjaya Lakshan, the fast bowling allrounder from Colts CC, who is also a Sri Lankan ODI Cap will be the skipper for the shorter format. He spoke about the importance of settling into the UK conditions and the pitches quickly.

“Acclimatizing to the conditions will be the main challenge. However, for the T20s it will be a lot easier since we would have already played three 4-day games by the time we get to the T20s. “The T20 skipper Lakshan said.

“We have been training as a squad since the beginning of April at Khettarama. The boys are eager to do well in England. Also, the biggest positive is that all these players have been playing very well in the recently concluded National Super League and the Major Clubs Emerging Tournament.” Head Coach of the Sri Lanka Emerging Team, Ruwan Kalpage said.

The 18 member squad was selected based on the performances at the National Super League and the Emerging Tournament and only 2 out of these 18 players have previous experience playing the international level (Dhananjaya Lakshan & Ashen Bandara).

The batting department is led by the four day skipper Nipun Dananjaya and it is further strengthened by the addition of batters such as right-hander Avishka Perera, the highest runs scorer during the Emerging Tournament. Avishka Tharindu who ended up with a staggering average of 239 in the Emerging Tournament, Nuwanindu Fernando, Lasith Croospulle and Nishan Madushka are some of the other batters to keep an eye on.

When it comes to the bowling front, the team has a good mixture of pace and spin with the likes of Dilum Sudheera,  the left arm spinner who took 52 wickets in just 5 matches with an average below 11 during the Emerging Tournament leading the attack. He will be accompanied by off-spinner Ashian Daniel who took 16 wickets during the NSL. The seamers will be Nipun Ransika, Udith Madushan & Nipun Malinga.

Dunith Wellalage, the star player and skipper of the Sri Lankan U19 World Cup campaign earlier this year, is joined by his teammate, left-arm seamer Yasiru Rodrigo as the two schoolboy cricketers in the touring party.

The first Four-Day fixture will begin on the 6th of May in Kent.