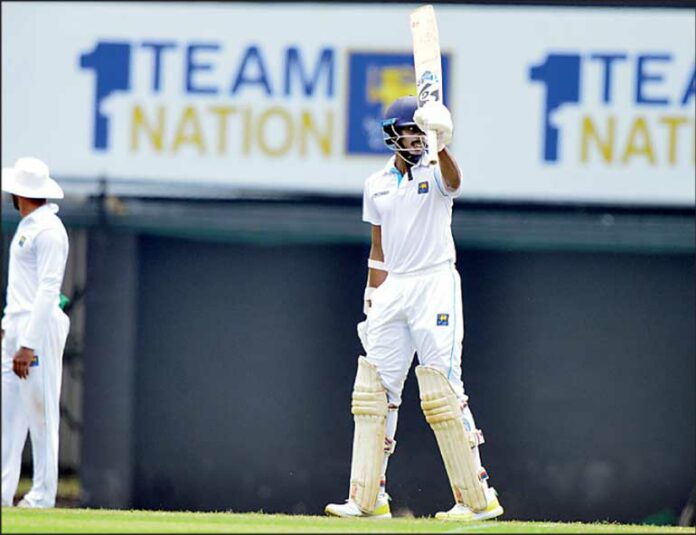 The 3rd and final Four Day fixture of Sri Lanka Emerging Tour of England kicked off today at Guildford against 19-time County Champions Surrey. After the 1st session was completely washed out due to bad weather, everything was set to begin action from 2nd session onwards.

Lasith Croospulle, who scored a top-notch century against Kent during the 1st tour game, came out to open the innings with a brand new comrade in Avishka Perera as skipper Nipun Dananjaya who has been short of runs during the tour went down the order.

Croospulle scored an eventful 32 off 36 deliveries which included 4 fours and a six before debutant Tom Lawes managed to produce a nick which was well caught by keeper Jamie Smith. Soon after Nishan Madushka was also dismissed for just 1 run and Perera followed for 13 after facing 55 deliveries.

After a great start, Sri Lanka Emerging XI were in a spot of bother as they were 3 wickets down for 57. Skipper Dananjaya walked out to bat next in his new position of number 5 and it’s fair to say that the change of roles turned out to be a very good move.

He looked much more comfortable at the crease and timed the ball exceptionally. But as he was scoring freely the young middle order faltered around him. Nuwanidu Fernando and Santhush Gunathilake who scored back-to-back fifties during the previous games failed to make an impression as Nuwanidu departed for 16 while Santhush scored only 9.

With 5 wickets down for 127, someone from the lower order needed to put his hand up and support the skipper. Avishka Tharindu who walked out to bat at number 7 did just that as the duo constructed a brilliant stand of 82 for the 6th wicket and rescued the visitors from a tricky position.

Dananjaya, who had athorrid time during the last 2 matches, finally managed to reach his first half century of the tour. Tharindu was unfortunately dismissed by the part time medium pace of Ryan Patel for 48.

With less than 7 overs to go, Manelker de Silva managed to survive till stumps with Dananjya as Sri Lanka Emerging XI ended day 1 on 230 for the loss of 6 wickets. Dananjaya, who led from the front was unbeaten on 81 and will be aiming to reach his 2nd first class century tomorrow.

The 2nd Day of the Four Day encounter will begin at 3.30PM Sri Lanka time on the 21st of May.