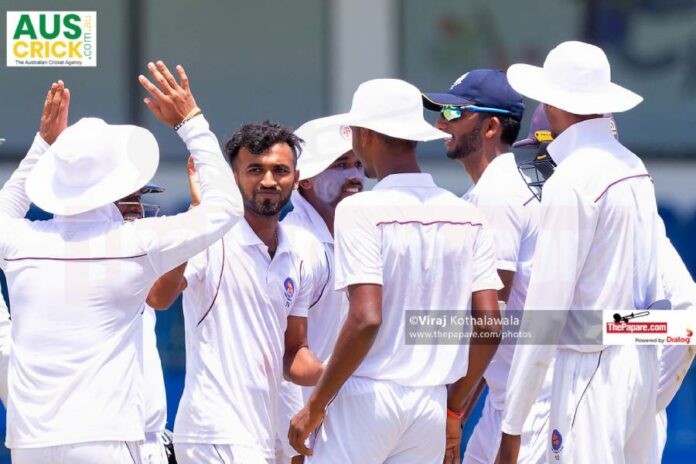 Sri Lanka Cricket (SLC) has finalized a squad of 18 players for the upcoming Emerging Team tour of England 2022 next month, ThePapare.com learns.

The team will play three four-day matches and three T20 matches from 6th to 29th May in the United Kingdom. With the initially appointed captain Kamindu Mendis elevated to the national team, the selectors have decided to hand the reins to two players. Former Sri Lanka U19 captain and SSC batter Nipun Dananjaya will lead the team in the red-ball format, whilst Colts CC all-rounder Dhananjaya Lakshan will captain the team in the T20s.

Out of the 18 players, two players, Ashen Bandara and Dhananjaya Lakshan have represented the national team. Two schoolboy cricketers, spin-bowling all-rounder Dunith Wellalage of St. Joseph’s College and left-arm seamer Yasiru Rodrigo of S. Thomas’ College have also been named in the squad.

Most of the players have been picked on their performances in the recently concluded Major Club Emerging Tournament 2021/22 and National Super League 2022.

The batting department will be bolstered by batters such as Avishka Perera, Lasith Croospulle, Nishan Madushka, Nuwanidu Fernando, and Avishka Tharindu will get a much-needed opportunity to play in UK conditions along with Nipun Dananjaya and Ashen Bandara.

The fast bowlers such as Nipun Malinga, Nipun Ransika, Udith Madushan, Yasiru Rodrigo and Amshi De Silva will have a major workload in the UK conditions.

The team will be coached by recently appointed Emerging Team Head Coach Ruwan Kalpage and will be ably assisted by Malinda Warnapura. Chamila Gamage will work as the Fast-bowling coach whilst Vinothen John will act as the Manager of the team.

The team is set to depart for England on the 1st of May.