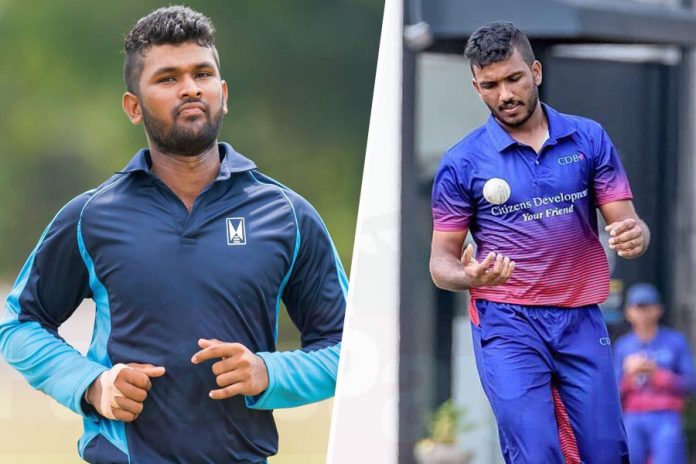 Navy started the day 03 proceedings on 76 for 1 at Surrey grounds, Maggona after a couple of disappointing days weather wise. Overnight batsman Waruna Mayantha couldn’t stay for too long as he was dismissed for 40 adding only 9 runs for the day.

Then it was all about former Cambrian Dilan Chandima and his scintillating century which helped Navy to completely dominate the day and earn the points for a first innings lead. His innings was terminated on 126 off Lakshan Jayasinghe’s bowling.  Lakshan was the pick of the bowlers for Kaluthara Town Club taking 4 wickets. Game ended in yet another draw.

Air Force lower order batsmen only added 75 runs on day 02 after being 250/5 at stumps-day 01. 27-year-old Kaushalya Gajasinghe who came to the middle hoping for a century after his day 1’s knock of 73 had to return to the dressing room in no time with an addition of 2 runs. Left arm orthodox Dulanjana Mendis was responsible for 4 of Air Force’s wickets as the innings wrapped up for 315.

Left handed batsman Sanjula Abeywickrama then made sure Lankan Cricket Club was not too much behind the game with a valuable 82 before getting out 18 runs short of a well-deserved century. Geeth Kumara who is on 58* will be the key for Lankan CC who were 220/5 at the close of the day to salvage a 1st innings lead.

After perishing for 147 in the first innings Bloomfield witnessed a perfect day to record a fantastic come -from behind to win on day 3 at their home grounds vs Panadura Sports Club.

Panadura SC were all out without an individual half century to their batsmen within 44 overs due to exploits by leggy Madushan Ravichandramumar who gathered 5 opposition scalps for 54 runs.

Then, despite all the odds of day 3 pitch, former Wesley captain Sachin Jayawardene and Sanoj Dharshika put an unbeaten century partnership to guide Bloomfield to a 7-wicket victory in 54 overs. Before that, off spinner Sehan Weerasinghe gave Bloomfield a proper scare as he picked up three quickly wickets but Jayawardene’s blazing century was the highlight of the day.

Indian export Uday Kaul (elder brother of Siddarth Kaul) put Police Sports Club at front with a mammoth 158 at Police Park grounds, Colombo today. Batting for more than 60 overs of his own, Kaul made sure visitors’ bowlers had a nightmare day 02 at the middle.

Pawan Dias and Manjula Jayawardene racked up half centuries to help Police to reach at 359 despite 5-fer from tall spinner Gayan Sirisoma. Galle were 34/1 at stumps still 325 runs behind.