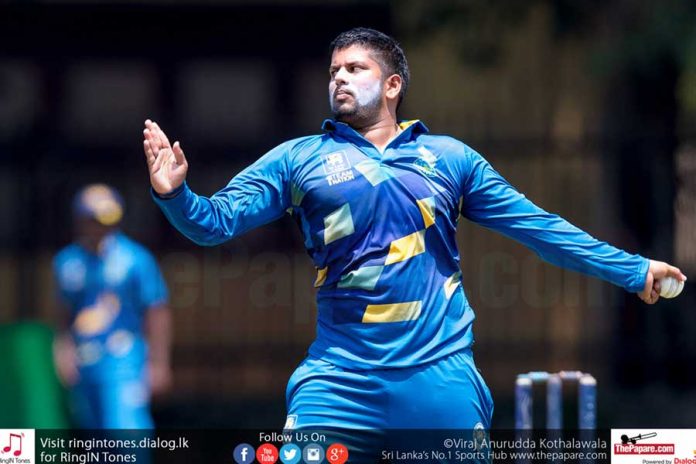 Four games of the SLC Major League Tier ‘B’ Tournament were worked-off today, 6th February, around the island.

After restricting Panadura SC for a meek 156 runs on day-one, the boys from Bloomfield fell even shorter in their leap. Left-arm spinner Naveen Kavikara punished the Bloomfield batsmen as the 27-year-old bagged 7 wickets for 37 runs.

Yet again, the batting was a struggle for Panadura SC as they went into stumps at 165 for 8. Kashif Naveed managed a fighting 60 with the bat. Shehan Weerasinghe was unbeaten at 45 runs by the close of play.

Following a frustrating day-one, which saw play of only 19 overs due to rain, Kalutara TC resumed their innings with the top order back in the hut. From 34 for 4, they went on to make a decent total of 209 runs.

Sachintha Jayathilaka made a valuable half-century for Kalutara TC. Thafik Imalsha picked up 4 wickets while Hashim Wilman and Kavika Dilshan picked up 2 wickets each.

Navy SC lost its first wicket early when the 19-year-old Revan Kelly departed with just 21 runs. They managed to see through the rest of the overs in the day as they went off the field at 76 runs without losing more wickets. Waruna Mayantha is hanging at the crease with 31 runs to his name.

Galle CC won the toss and invited the Police SC to occupy the crease first. The game is being played at the Police Park grounds, Colombo.

An unbeaten 80 from the foreign star of Police SC, Uday Kaul, took them to 156 runs for the loss of 3 wickets. Left-hander Pawan Dias also chipped in with a half-century. Off-spinner Rajeewa Weerasinghe left the field bagging 2 wickets to his name.

The play was cut-short due to bad light with about half an hour of play left and eventually suspended.

Air Force SC had a good outing at Katunayake as they batted the day out scoring 250 runs for the loss of 5 wickets, after being put to bat first.

Kaushalya Gajasinghe looked flawless at the crease, as the left-hander was unbeaten on 73 at close of play. Chanuka Wijesinghe also contributed with a fifty early on. Off-spinner Chanaka Ruwansiri was the pick of the bowlers for Air Force, collecting 2 wickets to his name.