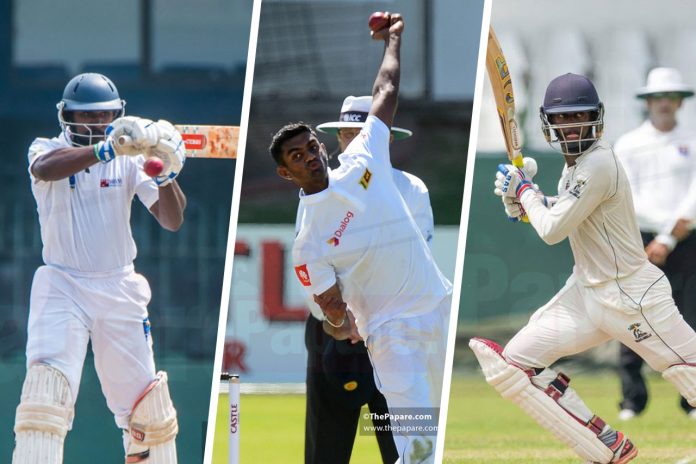 Sri Lanka Emerging once again found themselves in a spot of bother at the end of the 2nd day’s play in the 2nd Unofficial Test against South Africa Emerging team in Pretoria. In reply to the 441 runs made by the hosts, Sri Lanka were 5-down for 217 runs.

Following a fruitless opening day, the tourists started off day 2 brilliantly – as their ace bowler, Lasith Embuldeniya dismissed Sinethemba Qeshile with the 2nd delivery of the 2nd over of the day.

The Proteas were soon reduced to 383/8 within the first hour of play courtesy Embuldeniya’s brilliance. Accounting for almost every South African wicket to fall, Embuldeniya’s 7 wickets also included the dangerous Raynard van Tonder, the Captain, for a well-made 137.

Sri Lanka once again lost control as number 8, Kyle Simmonds counter-attacked the Lankan bowling. He scored a quick-fire 73 off 57 deliveries including 8 boundaries and 3 sixes. The partnership between him and number 10 Thando Ntini, son of the famous Makhaya Ntini, helped their team near 450 as they added 58 runs in 8.4 overs – 52 balls.

Proteas ahead on day 1 of 2nd unofficial Test

It was once again that man, Embuldeniya who stood up for Sri Lanka, breaking the partnership with Simmonds’ wicket – his 8th scalp. The final wicket followed soon after as Embuldeniya’s final figures read as 42-5-156-8 He bowled almost twice as many overs as the man who bowled 2nd most number of overs for the Sri Lankans.

The start for Sri Lanka with the bat was not ideal as NCC wicket-keeper Lahiru Udara, opening the batting, lost his wicket early. Pathum Nissanka after getting a good start was dimissed by Ntini before the same bowler sent back Captain Charith Asalanka for 18. Opener Minod Bhanuka who batted really well for his 56, was also dismissed in between to add to Sri Lanka’s woes.

With Sri Lanka struggling on 128/4 and trailing by a massive 313 runs, new-comers Pramod Maduwantha and Jehan Daniel batted for 33.4 long overs. Adding 89 stubborn runs, the duo certainly brought Sri Lanka hope of getting out of the shell they’ve been pushed into. However, Daniel’s dismissal in the final delivery of the day once again put the home team on top.

Sri Lanka will now depend a lot on Pramod who remained unbeaten on 47 at close. The batsman in next is all-rounder Chamika Karunaratne who will be followed by the bowlers, who are also quite good in handling the bat.