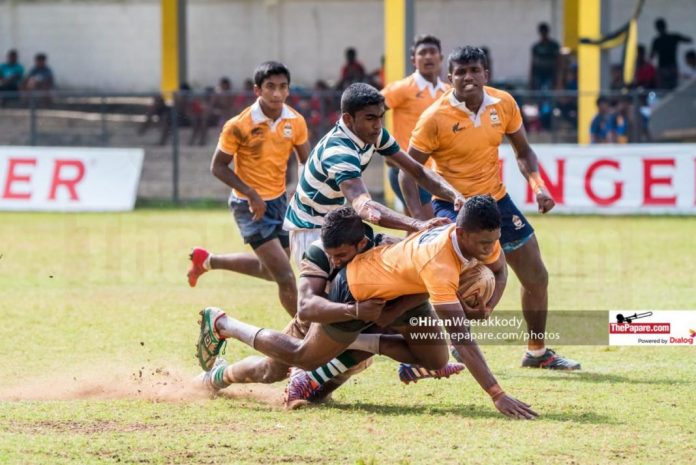 Day 1 of the Singer All Island U18 Rugby Sevens Championship ended in a rather dramatic way as the favourites and front runners of the Schools league, finished behind teams that play in the ‘B’ Division.

What happened at Racecourse?

In Group ‘A’ the defending champions, St. Peter’s College, managed to stay on top as they remained unbeaten throughout the day, playing just two matches since the Katugasthota Rahula College team withdrew from the tournament. The Peterites managed to score 31 points against both their opponents whilst only conceding 7 points throughout the two games.

Group B fielded the favourites Isipathana College, who were definite contenders for the Cup. But, surprising the entire stadium, the resilient Thomians beat the Green Machine 17-12 and went on to top the group and qualify for the Cup quarters. A second place finish for the Pathanians meant that they will fight for the Bowl tomorrow.

As predicted by many, Wesley College topped Group C after winning all three games and remaining unbeaten as they qualified to fight for the Cup championship tomorrow. St. Anthony’s College finished in second whilst St. Aloysius and St. John’s finished 3rd and 4th respectively.

The Trinity Lions were the most exciting to watch, as they prevented their opponents from going over the whitewash in all three games whilst they piled up a mammoth 147 points throughout the day. Lumbini College finished in second in Group D while Richmond managed to force Nalanda to the bottom of their group.

What happened at the Royal Complex?

Despite having many experienced players, Kingswood College failed to lock the top spot in Group E as Science College rose to the occasion when it mattered and defeated the King’s 14-12 in a nail-biting encounter to qualify for the Cup quarters.

In a rather surprising turn of events in Group F, the juniors of the ‘threepeat’ schools rugby league defending champions Royal College, failed to match the standards of their first XV team, as Sumangala College Kandy got the better of the Royalists defeating them 21-07 to top the group.

The most intense battle took place between DS and St. Joeseph’s when they took each other on in the match that would decide the Group G topper. However, after 14 minutes of play, nothing separated the two teams as the game ended in a 5-all stalemate. Joes finished on top of the group after calculating the points scored and conceded.

Catch the live action of day 2 of the U18 Sevens Live and Exclusive on ThePapare.com tomorrow from 8.50 am onwards.