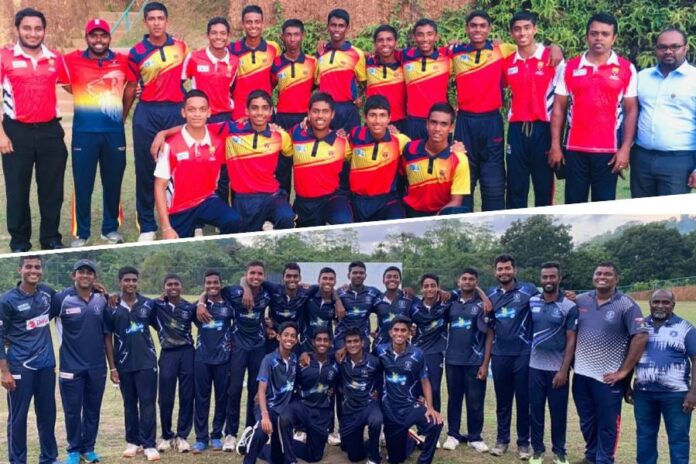 Trinity College and St. Joseph’s College emerged Joint Champions of the U17 Division 1 Inter-Schools Cricket Tournament, as the final ended in a tie today (24th September) at Surrey Village Grounds in Maggona.

St. Joseph’s College Skipper Kenath Liyanage won the toss and invited Trinity College to bat first. The boys from Kandy were unable to get off to a good start as they lost the first 3 wickets for just 49 runs on the board.

However, three 30+ partnerships built by the Trinity middle order ensured that they reached 198/8 in the allotted 50 overs. No. 6 batter Jayavi Liyanagama was the top-scorer for Trinity College as he made 48 runs off 79 balls with 4 fours.

Kaveen Pathirana and Yenula Dewthusa starred with the ball for the Joes, sharing 5 wickets between them.

Chasing 199 runs to win, St. Joseph’s College also got off to a poor start with the bat, losing 2 top order wickets for 33 runs inside the first 10 overs. However, opening batter Sahan Dabare and Skipper Kenath Liyanage rescued the innings, adding a 59-run partnership for the 3rd wicket.

After their dismissals, the St. Joseph’s College batting lineup saw a collapse as they lost 7 wickets for 74 runs, reducing their hopes of clinching the title. However, the Joes’ last pair, Dunick Perera and Oshada Gunasinghe, showed great fightback, pushing their side forward.

The duo added 32 runs to the last wicket and almost snatched a victory for the Joes before Perera ran himself out in the very last ball of the innings, when they needed 2 runs in the final delivery.