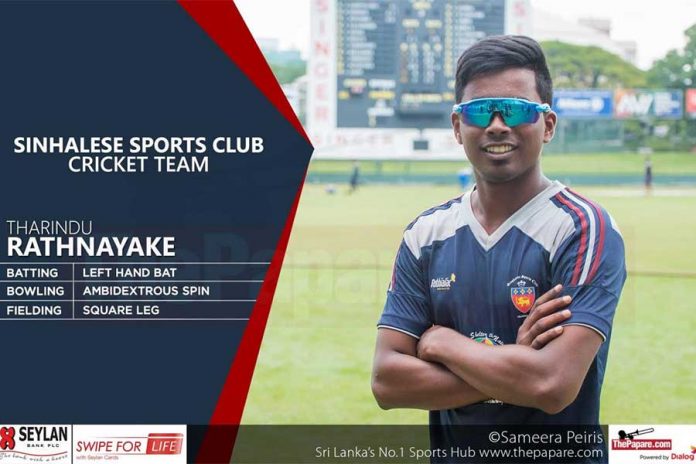 6 matches of the Sri Lanka Cricket Premier League continued around the island today (1).

The clash of the Colombo 7 neighbors turned out to be a nail-biter with the ambidextrous Tharindu Ratnayake making sure SSC went ahead on first innings with a stunning spell of spin bowling.

More familiar as ‘Daetha’ (bowling with both arms) among the club circuit, Ratnayake spun a web around a strong top and middle order of CCC with 7/75, before the returning Nuwan Pradeep secured the win when he had last man Vishwa Fernando caught behind with CCC 4 runs short of SSC’s 229 in the first innings.

For CCC, Lasith Abeyratne fought a lone battle making 92 but failed to guide his team to victory, as they lost their last four wickets for just 13 runs.

SSC batting a second time around ended the day on 92/3 and will go into the final day with a vital 96 run lead.

Youngster Ashen Bandara’s stunning century was the highlight on day two of the clash between Saracens SC and Colts Cricket Club.

Colts were in a spot of bother at 133/5 when stumps were drawn, but a composed unbeaten 56* from Sadeera Samarawickrama – who has been named in Sri Lanka’s touring pretty to New Zealand – kept them in the hung going into day 3.

Angelo Perera hit a magnificent century to pull NCC out of the woods and guide them to a respectable 272 on day two of their encounter against Ragama CC.

His knock of 123 was the only substantial score of the NCC innings, but the focus was on Ragama CC’s new opener Lahiru Thirimanne – who will most likely open the batting in New Zealand for Sri Lanka- who made a composed half century to set a good platform for the visitors.

SLPA were in all sorts of trouble as the Moors spinners had them at 93/6 at close.

BRC put up a masterclass in batting as they replied with 318/5 after Baduraliya were bowled out for 258 earlier in the day.

Right arm quick Mohomad Shiraz ended with 5/44 for BRC before Rumesh Buddhika and Hashen Ramanayake hit half centuries as they went ahead on first innings.

Sachitha Pathirana toiled hard for Baduraliya picking up 3 wickets, but he conceded 112 runs and BRC took firm control of the game.

Lahiru Milantha also chipped in with a half century as Tamil Union made 322/6 in reply to Chilaw’s 210 all-out.

Ramith Rambukwella’s 5/54 was the highlight on the opening day as the pitch continued to aid the spinners.