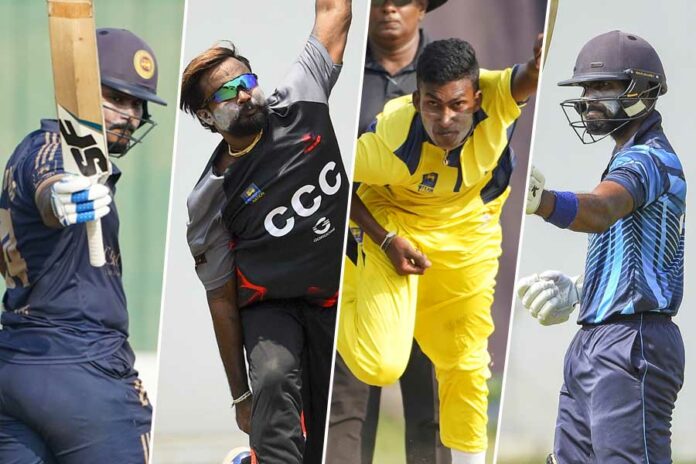 CCC, SSC, Kurunegala YCC and Army CC qualified to the semi-finals of the SLC Major Club T20 Tournament 2020/21 as they defeated Ragama CC, Colts CC, NCC and Negombo CC in their respective quarter-final encounters worked off today at Colombo.

The first quarter-final held between CCC and Ragama CC was a one-sided affair, as CCC inflicted an easy 57-run victory at P. Sara Oval Grounds in Colombo. Having asked to bat first, CCC posted a competitive total on the board in 150 for 5 in the allotted 20 overs.

Lasith Abeyratne, who has been in terrific form with the bat for CCC this season, scored his third half-century of the tournament today with a knock of 54 runs off 38 balls, including 3 fours and 3 sixes.

In reply, the Ragama batsmen were never in the run chase as they were bamboozled by the left-arm spin of Malinda Pushpakumara. He took 4 wickets for 20 runs helping CCC to bowl out Ragama CC for 93 runs.

NCC, one of the strongest contenders of the tournament, were handed a shocking defeat by Kurunegala YCC in the second quarter final worked off today at P. Sara Oval Grounds in Colombo.

After winning the toss, the lads from Kurunegala opted to bat first and put on 155 runs for 5 in the alloted 20 overs, with Gayan Maneeshan top-scoring with 56 runs off 48 balls which included 2 fours and 2 sixes.

National capped speedster Lahiru Kumara picked up 4 wickets for 17 runs for NCC. In reply, NCC had a very poor outing with the bat as they crumbled out for just 92 runs in 14.4 overs. Naveen Gunawardene was the pick of the bowlers for Kurunegala YCC as he bagged 3 scalps for just 14 runs.

SSC registered a comprehensive 6-wicket win over Colts CC in the the third quarter-final held today at CCC Grounds in Colombo. After been put into bat first, the Colts managed to post only 117 runs on the board as the left-arm spinner Prabath Jayasuriya wrecked them with the ball, taking 4 scalps for 16 runs.

The SSC batsmen chased down the target with ease, losing only 4 wickets, where in-form batsman Nuwanindu Fernando top-scored with a 41-run knock with the bat.

The fourth quarter final held between Army CC and Negombo CC went down to the wire, but the soldiers held their nerve to clinch a thrilling 6-run win and qualified to the semi-finals.

Having won the toss, Army CC opted to bat first at CCC Grounds in Colombo. They made 164 for 5, thanks to the contributions with the bat from Thulina Dilshan (39) and Himasha Liyanage (33*).

Chasing 165 runs to win, they got off to a good start as they raced away to 62 for 1 in 7 overs. The opener Dilshan Munaweera (59) and middle order batsman Madawa Warnapura (55) kept Negombo CC in the game until the 16th over, but the dismissal of Munaweera changed the game in favor of Army CC as they fell short of just 6 runs at the end.

Heshan Hettiarachchi was brilliant with the ball for Army CC as he took a 5-wicket haul for 38 runs.