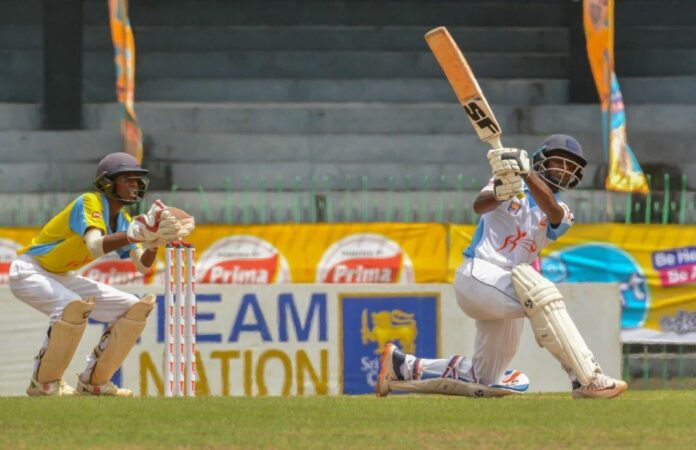 Two encounters of the under 15 Youth League conducted by Sri Lanka Cricket and sponsored by Prima took place to kick-off the 5-team tournament.

Colombo North and Galle locked horns at the MCA grounds in a low scoring encounter where Colombo North defended a target of 151 against Galle. Colombo North, who won the toss and decided to bat first, had a horrid start as wickets fell at regular intervals, derailing their momentum.

The top order were reduced to 28 for 4 inside the first 10 overs. But a 40-run stand for the 5th wicket between Sadeesh Silva and Rachintha de Silva brought back some life into their innings. 28 and 21 run stands for the 6th and 7th wickets took their total over 100 and the Colombo North tail also added 33 runs for the last 2 wickets as they crawled to 150.

Sadeesha Silva, who settled the ship for Colombo North after the fall of early wickets, scored 46 off 85 balls and their number 8 batter Osanda Pamuditha, who batted with authority to get them to a respectable score, made a patient 33 from 81 deliveries. Kasun Kavinda was the pick of the bowlers for Galle, taking 3 wickets for 25 runs and Praveen Madushanka also took 2 wickets for 8 runs in 6 overs.

Chasing a modest target of 151, Galle had a decent start with the opening pair adding 31 runs. At one point Galle were 87 for 4 needing just 64 more runs with 6 wickets in hand but the lower middle order faltered big time against some top-notch bowling from the Colombo North attack.

Dulsith Darshana looked the most comfortable as a batsman in the middle for Galle, scoring 28 off 34. Risinu Geenuka, who tried to play the anchor role, made 23 from 80 balls. Other than these 2, the rest of the batters couldn’t contribute to Galle’s cause as they were eventually bowled out for 138, giving Colombo North a thrilling 12-run win. Dinuja Samanaratne who bowled his heart out, took 4 wickets for 15 runs to lead the way for Colombo North bowlers. Lahiru Lakmal supported Samanaratne really well with 3 for 29.

In the other encounter of the day, Colombo South faced Kandy at the Irrigation Grounds in Ratmalana. This was a one-sided match where Colombo South registered a comfortable 112-run win to start the tournament off in style. Colombo South, who won the toss and opted to bat first, made 206 losing just 5 wickets in their 50 overs.

At one stage Colombo South were struggling on 89 for 5 but Yasindu Dissanayake and Sathsara Nilanjith put together a phenomenal 117-run unbeaten partnership for the 6th wicket to help them recover.

Dissanayake who played the role of the aggressor in the stand, made 77 from 84 balls which included 5 fours and 4 maximums. Nilanjith on the other hand was more watchful and made sure no more wickets fell while Dissanayake was punishing the Kandy bowlers. Kenula Pihilianga had the best outing as a bowler for Kandy with figures of 2 for 32 in his 10.

Chasing a total of 207, Kandy never really looked in touch as a target over 200 seemed too much for the youngsters. Only one batter from the eleven reached the double figure mark for Kandy and they were bowled out for just 94 in 25.2 overs. Himaru Deshan took 5 for 35 and Koshendra Fernando claimed 4 scalps for 17 runs.

The next two clashes of the tournament will take place on the 22nd where Dambulla will play their first game against Kandy and Colombo South will face Galle. Stay tuned to ThePapare.Com for all the latest news on the Prima SLC Youth League Under 15 Inter Provincial Tournament 2022.