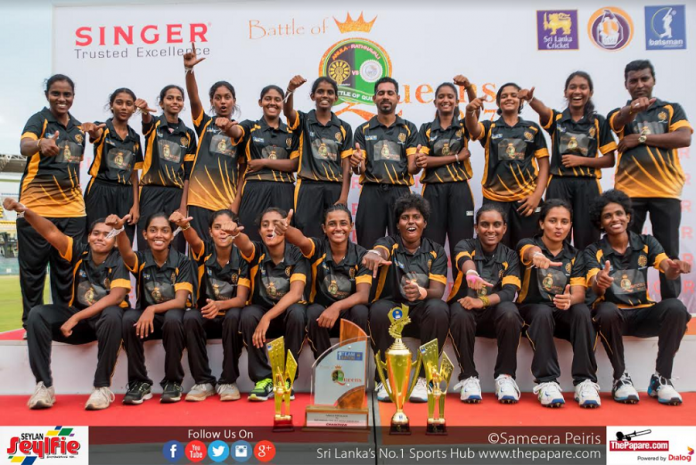 Sri Lanka Cricket (SLC) in a bid to popularize women’s cricket in the country have decided to support the big matches of 30 identified Girls Schools during the year 2018.

SLC will provide a grant of Rs. 100,000 for each game and in addition will also provide cricketing equipment for the Girls Schools taking part in the big matches and will also pay the fees of the Umpires and Scorers covering the respective big matches.

The Sri Lanka Women’s team was recently outplayed by the Pakistani Women in a bilateral series and as the ratings are a concern, the Lankan girls are not in a situation of competing against Australia, New Zealand, England and India.

The latest move, which is being made under the guidance of SLC President Mr. Thilanga Sumathipala, is part of SLC’s vision to develop Women’s Cricket in the country by attracting more Girls to play the game, which in turn will open the doors for the national women’s team. This is the second time, SLC is supporting Girls School Big Matches, with the first being last year.

The Women’s Under 23 Super 4 Provincial tournament, organized by Sri Lanka…

During this year, 10 more Girl Schools will join the Big Match fray thus, making it a total of 30 from last year’s figure. Schools from the districts of Colombo, Gampaha, Kalutara, Jaffna, Trincomalee, Batticaloa, Ampara, Kandy,Monaragala, Ampara, Badulla, Matara and Anuradhapura will play ‘Big Matches’ during this year.

SLC will also provide its international venues such as Pallekele and R. Premadasa International Cricket Ground to work out the matches.

The matches will be a 50-over affair and will be played either in tape ball, leather ball or tennis ball.

Already the Big Matches of Panadura Mahanama Girls School vs Wadduwa Central College and Gamini Central College vs Our Ladies College of Nuwaraeliya was held recently with the support of the SLC.