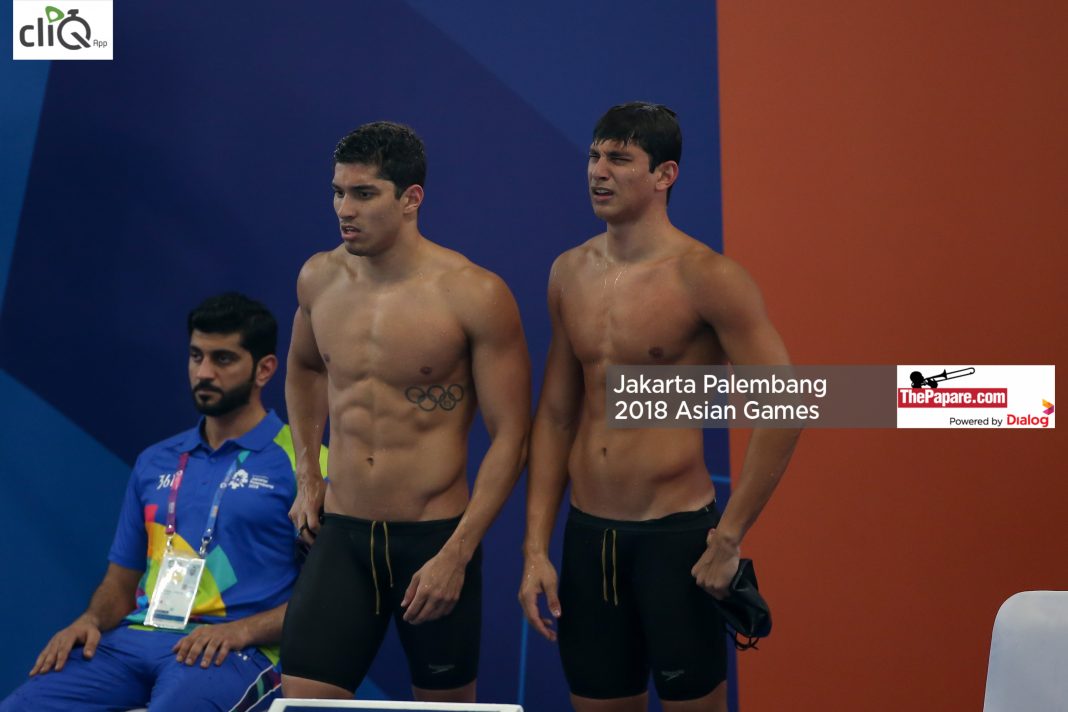 Team Sri Lanka faced an unfortunate exit in the Men’s 4x100m Freestyle Relay at the Asian Games, a short while ago.

The foursome that made phenomenal strides in Sri Lanka swimming at the Commonwealth Games earlier this year, participated in their first ever Asian Games with high hopes of medaling. The team comprised of Matthew Abeysinghe, Kyle Abeysinghe, Akalanka Peiris and Cherantha De Silva.

The Men’s 4x100m event was swum across 3 heats with Sri Lanka placed in Heat 2 alongside some of the dominant nations, including Singapore and Japan.

Just as in Gold Coast, Sri Lanka’s most promising swimmer Matthew Abeysinghe took the reins for Team Sri Lanka and kick started the relay. The older Abeysinghe brother was quick off the blocks, trailing closely Shinri Shioura of Japan around the 50m mark, Shioura clocked 23.28 secs to Matthew’s 23.53secs.

ThePapare.com | 21/08/2018 Editing and re-using images without permission of ThePapare.com…

Abeysinghe bounced back and clocked 49.16 seconds at the change off, edging around his current National record (49.11) to finish first in the pack. Unfortunately, Sri Lanka’s second lapper, Kyle Abeysinghe was milliseconds premature in his kick off and caused the team to be disqualified at the end of race.

This was a similar fate to that which the same team faced at the Commonwealth Games, when Team Sri Lanka was disqualified in the final of the relay with an early charge by Cherantha De Silva in the fourth lap. The Asian Games was to be the teams’ redemption, but, once again, they were forced to bid adieu in unfortunate circumstances.

“This is a new relay team and we just started to make history for Sri Lanka, so the tension and excitement to win at the world stage is still overwhelming. We finished 6th and made it to the finals if not for the disqualification.Mistakes will happen, but we are hungrier than ever to win as a team!” said Cherantha De Silva, after the race this morning.

The final events for the Sri Lankan swimming contingent will take place tomorrow, 23rd August, at the GBK Aquatic Arena. Akalanka Peiris will take on the Men’s 200m Backstroke at 6:38am SL time, while Cherantha De Silva will swim in heat 3 of the Men’s 50m Butterfly at 7:00am SL time. Kyle Abyesinghe and Matthew Abeysinghe will swim in the 100m Freestyle 7:22am SL Time.

Keep it logged on to ThePapare.com to stay updated on the swimmers’ journey in the Asian Games 2018.