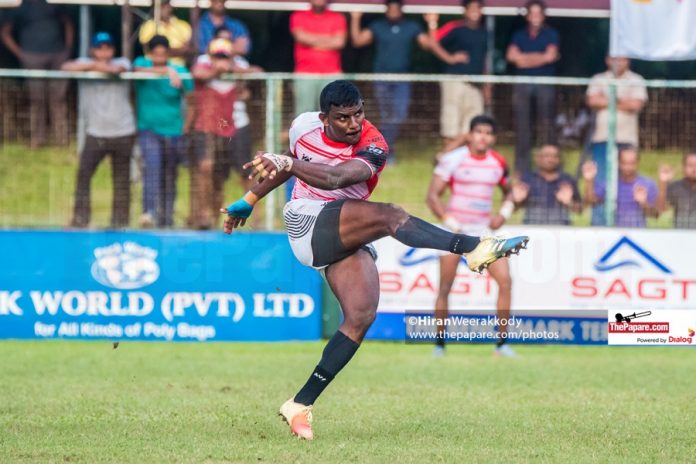 In 2016, the news that a young lad was clearing penalties 50-meters and beyond like an everyday thing drifted the way of ThePapare.com. It was a cause for some investigation.

Interested to find out what the social media hullabaloo was about, we made it to Pallekelle to watch the game where this young lad was playing. It was Trinity playing his side, St. Anthony’s.

The game went in favour of Trinity but what caught everyone’s eye was the opposition player wearing the #10 jersey.

The schools’ rugby fraternity had seen the likes of different first-five eighth’s; many who excelled in the schools’ arena and a few who made it to a professional arena. But somehow this boy was different.

From the kick-off whistle, he looked professional and mature for a school boy. 11th 2016; It was the 54th minute of play. St. Anthony’s were not on the winning side but were just hanging- in there. The scrum-half clears the ruck, he sees his #10 aligning way back, beyond the 50 meters. He has a slight doubt on his mind but he knows what he is going for…

The #10 is Samuel Maduwantha. He gets hold of the ball, takes three seconds to bring his right leg to contention. He attempts an unimaginable drop-goal. The crowd watches open-mouthed, the kick sailing. It has the distance and clears the upright with a few meters to spare.  The Trinity camp can’t believe it, the stunned Antonians celebrate, the stands erupt.  Did that just happen?

Fast forward to 2018, a lot of things have changed. A new jersey, new boots and a new league. But the jersey number, the name, the stride and his kicking style has remained the same.

Ahead of the season, the CH & FC team takes flight to Doha to face the Doha RFC side in a friendly.

The team is once again back-peddling. Henry Terrance scored for the Lankan side but the game is a physical battle of the forwards.

‘It is a packed audience at the Rugby Football Centre in Qatar with all the Sri Lankans making it there on the holiday!’ echoed ThePapare commentators who brought the game live.

Samuel Maduwantha has already kicked an early penalty for the visitors. Doha RFC had also extended their score to 15 as pressure was building on this boy from the hill capital. It all came down to the 74th minute. He had already 3 penalties through.

They trail 8-12 at halftime, the battle is physical, skipper Yoshitha Rajapakse has no option but put the team’s destiny on a 21-year-old.

The ball is in his court, a 24-meter penalty. The assistant coach was waiting anxiously till this moment arrives to run into the ground with the kicking tee.

The captain makes no hesitation. Points the posts straightaway!

Maduwantha readies. Takes three strides back, leans forward. Focuses one eye on the post, the other on the ball. Comes in with the force. The balls sails smoothly over for three points. He runs back to the base. The Lankans and the Qataris stand up in ovation for this youngster. CH & FC win 17-15 against Doha Rugby Football Club in a thriller!

And, that would have been one of the easiest match winners that he has ever kicked!

Read more: Samuel Maduwantha wins it for CH in Qatar

November 17th 2018:
CH & FC has just gone into deadlock. It is their second game against Havelocks’s at Havelock Park. Captain Yoshitha Rajapakse goes to Samuel Maduwantha, just like he has done always.

Maduwantha doesn’t shy away from the storm, instead, he embraces it.
The score stands stalemate 13-13 at the brink of halftime. CH & FC have with themselves a penalty, and it is almost 63 meters.

Samuel Maduwantha comes into the middle. Relaxed, readies for his kick.
He leans his body forward, has his fists tightly together. Looks from his left eye at the goal, then on the ball.

The kick flies over. He looks at the ball in flight, knows he’s got it through and returns to his base. The Havelock SC crowds stand up in appreciation.

It was, however, disappointment for CH & FC whose playmaker Maduwantha kicked 7 successful shots at goal making 19 points for himself when Havelock SC crashed the party.

Maduwantha has weathered the storm for CH in this new Dialog Rugby Season. He has made the CH & FC stand rigidly at Longdon Place and now at Havelock Park.

Sooner or later, the young lad will aspire to wearing a new jersey. No fancy club logos on it and the jersey would be green with a spirited Tusker shining on front on his chest.

A treasured number. A number that has been worn by greats who changed the country’s landscape of the sport… It is the revered #10 jersey.

Hopefully, Nothing Will Change then.