Home Features The rapid rise of the Lee-Maduwantha pairing 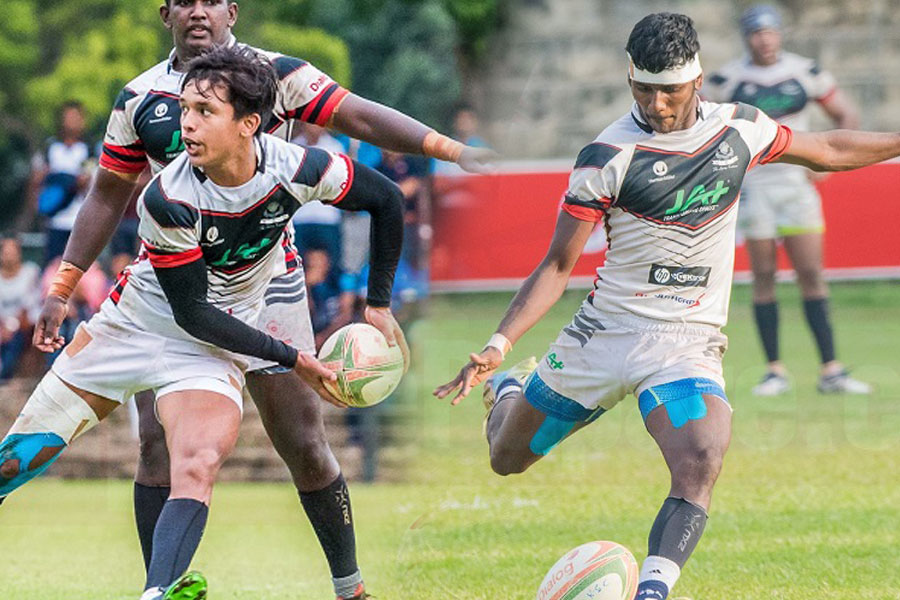 Following a sensational final season at school level, both Avishka Lee and Samuel Maduwantha have made an instant impact in the club arena in the 2017/18 Dialog Rugby league.

Right after school, Avishka Lee and Samuel Maduwantha were recruited by CH & FC for the 2017/18 season. Ever since, the duo have not looked back as they have made an instant impact in the ongoing Dialog Rugby league 2017/18 season.

Back in the day –

Maduwantha first made an impression in the 2016 season in which the youngster was known for his 50+ meter drop goals. He had an immaculate season that year and wrapped it up, bagging the title for the top points scorer.

Lee was an unknown commodity in 2016, and 2017 could not have started off in worse fashion as his Wesley team was brutally beaten by Trinity. The game ended in ugly fashion as a brawl seemingly ended many of the Wesley lads season.

Putting all of the drama behind him, He along with twin Avantha inspired his Wesley team to a top four finish as the duo were under the spotlight. From a 7th place finish in 2016, the Double Blues cruised to a 4th place finish last year

However, missing out on selection for the Junior Asiad will surely be smarting for the two youngsters as they were not granted the release needed by their club for National duty.

What we saw so far –

Avishka did not manage a start in the first game of the season, however, Samuel started in the more familiar fullback role as coach ‘Laga’ picked his team for the Kandy game played at Racecourse.

Ever since Maduwantha made the switch to the first receiver role, and was paired with Avishka the duo have excelled immensely.

A performance worth the man of the match. Maduwantha absolutely ran riot against CR & FC. his cross kicks put the back three of the opposition under immense amounts of pressure and even went on to assist Lee Keegal to a sublime try. This was a win that spurred on the lads from CH.

In the final game of the first round, Avishka started alongside Maduwantha in the 9-10 jersey respectively. The pair combined lethally and managed to script a win against Navy Sports Club, the win which kick started CH & FC’s season.

Unfortunately the lads from Maitland Crescent fell short in the return fixture at Welisara, however, the two combined yet again a week later to upset Havelock Sport Club in their backyard.

The match winning efforts of -Lee- often goes unnoticed as the other big names in the team get the credit, however, credit is the last thing the youngster should be after at this age as accolades will follow the young lad as he continues to rise with years to come.

In the most recent game against Kandy up at Nittawela, the two put on yet another show but unfortunately found themselves on the wrong side as veteran Fazil Marija worked his magic.

Impact on the scorers –

Avishka has gone on to impress on every occasion received and even managed 3 tries through out. meanwhile , Samuel Maduwantha has been influential both with ball in hand and on foot.

Maduwantha has gone on to accumilate 140 points in his first club season which is a huge feat for a 19-year-old.

Bit and pieces of magic –

Lee’s superior ability with his passes, vision and ability pick out runners have come in handy for CH & FC this season and his energy at the breakdown has helped the club leaps and bounds.

Samuel Maduwantha has been influential with ball in hand and on boot. His 100+ points with the boot displays what an educated right foot the youngster has on him. Furthermore, his cross kicks have been eye catching as much as effective.

With ball in hand, Maduwantha has broken the line on plenty of occasion sending through his team mates to the white wash.

The two will surely be working on their individual skills and will no doubt be seeking to put on a show for the CH faithful.

With time on their hands, and plenty of rugby on, both players will be seeking to gain experience not only from playing the game at the highest level but learning from Sri Lanka’s greats as they embark on their rugby career.

How has Sri Lanka performed in at the Asia U20 7’s?

Sri Lankans up for the Asian U23 Women’s Volleyball Championship

May 7, 2017
Avatars by Sterling Adventures