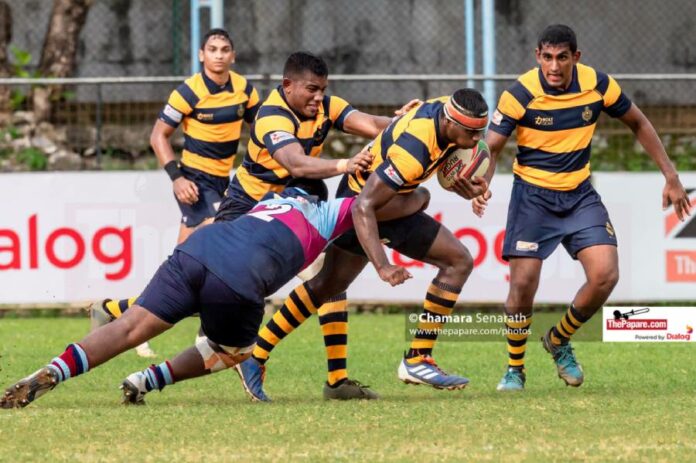 The hosts entered the fray as favorites, however, an unknown entity, St. Anthony’ College looked like no pushovers as Royal kicked off proceedings at the Complex on a gloomy evening.

Royal College got off to the best possible start as halfback Kaveen Sasanga sniped down an empty blind-side to score the opener of the game, just minutes after kick-off. Royal’s score was doubled soon after by Hasnaka Higgoda as the electric winger beat 3-men on his way to the try line.

Neither try was converted by Higgoda as the home side got off to the best possible start, leaving the visitors gassed. (RC 10-00 SACK)

The Antonians finally managed to get their hands on the pill and some territory, finding their way back into the game after the hosts quick start.

The visitors were put into more misery as Madushan and Zacky were both sin binned for similar acts of foul play. Pasindu Heshan from Royal College too saw yellow for a high shot as the referee was consistent with his display of bookings.

Dissanayake pulled one back in the far corner as the Antonians halved the deficit through a try from the winger as he found himself diving over to kick back life into the game at the Complex. Stylish left footer, Keerthisiri failed to add the extras from the touchline as an eventful first half drew to a close. (RC 10-05 SACK)

Neither team managed to get off to a positive start in the second half as the game started to swing side-to-side with fatigue and inexperience kicking into proceedings.

The Royal ship was steadied by their set of forwards as the hosts took the game by the scruff of its neck to make it a 17-point ball game, going into the latter stage of the second half.

Two tries from trademark rolling mauls saw the home team move past the visitors. Both tries were scored by Navin Perera as he dived over from the tail of the maul to score on two separate occasions.

Higgoda failed with the first conversion, however, Bimsara Peiris added the extras from the tee for the first time in the game as Royal seemingly took the game away from their opponents. (RC 22-05 SACK)

Eighth-man Amarasinghe dived over at the near touchline following some sublime running play by the Antonians as he gave the visiting faithful something to shout about in the dying embers of the game. Peiris added the extras from a tricky angle to mark the game’s end. (RC 22-12 SACK)

Royal College would be happy their rolling maul came to the fore in the second half, however, the visiting Antonians have plenty to work on given the nature of their inexperienced team.