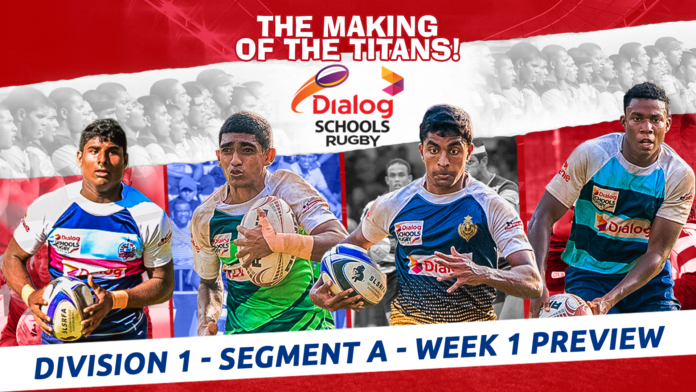 The much-anticipated Dialog Schools Rugby League 2022 will begin today (23) at Havelock Park, Colombo. After a lapse of two years, the schools are set to field fresh teams this season marking a new dawn in the Sri Lankan Schools Rugby arena.

The 2020 season was halted by the Covid-19 pandemic after just two weeks of action. With Rugby being a contact sport, due to strict health regulations, no 15-a-side tournaments were possible in 2021.

However, towards the latter part of the year, Dialog Schools Rugby Sevens tournaments were conducted throughout the country. But the real deal is finally here, and it promises some exciting rugby once again.

With 12 teams divided into 2 groups participating in the top tier, we take a closer look at the six fixtures of the opening week in the Division 1 – Segment A as the race to secure a play in the Super Round begins.

ThePapare.com will be bringing you all the action from these 6 games LIVE.

The curtain-raiser of the brand-new season should be a cracker of a game just like when these two teams last met in 2020, where we saw Kingswood recording a close 24-17 win over St. Joseph’s at the same venue. Incidentally, St. Joseph’s have lost to Kingswood in 2015 (24-17) and 2018 (26-22) as well. History is in favour of Kingswood, but the Josephians will be confident of breaking the hoodoo.

The boys from Darley Road will be led by Teran Karunanayake, who started off his first XV career as a winger but has switched to the midfield this season. Karunanayake’s deputy Rahel Jayawardene will start at the wing position. Seasoned coach Nilfer Ibrahim is shepherding the Josephians as the Head Coach with Dulanjana Wijesinghe serving as the Forwards Coach.

All opposing teams should do their homework to mark the well-built Josephian Number Eight, Naveen Marasinghe who will be featured in their attacking plans throughout the season.

In the last completed season in 2019, St. Joseph’s registered six wins out of nine games, ending at the number three position behind Royal and St. Peter’s in the final points table whereas Kingswood were crowned Plate champions.

The lads from Randles Hill, captained by center Gihan Ranaweera will be itching to get their season off to a flier and playing in the ‘Group of Death’, Kingswood could spring a surprise or two. Buddhika Thalagampola will function as the Head Coach of the Kingswood line-up with Roshan Weeraratne assisting him as the Backs Coach.

The defending champions, Royal College, who have held the title for three consecutive seasons before the Covid-19 pandemic, will be out to retain the championship for another year. The Royalists will be led by dynamic full-back Harshith Peiris while Kaveen Saranga will be the vice-captain of the side which will be once again be coached by Dushanth Lewke.

With some young players in their side, the pressure will be on Royal to deliver yet again and notching up a comprehensive win in the opening week will be on the checklist for the home team. In their previous encounter in 2020, Royal College registered a 41-14 win over the Anthonians at the same venue.

The Eagles will be led by number eight Jeyan Amarasinghe, who hails from a rugby family with his father, Dammika and elder brothers – Dinuk, Ruvan and Mathish all playing the oval-shaped ball game. Jeyan, who is also the Senior Head Prefect at College, will have Maliksha Perera as his deputy. Sumedha Malawana is the Head Coach of the St. Anthony’s Rugby squad for 2022.

St. Anthony’s had a forgettable 2019 season finishing in 3rd position in the Plate Championship, but they’ve always been a force to reckon with in the Schools Rugby circuit and should not be taken lightly.

Expect some fast-paced running rugby from both teams as getting early wins will be crucial in the quest for a place in the Super Round. In their previous encounter in 2020, Isipathana defeated Science 17-10 at their home grounds – Havelock Park.

The Isipathana College outfit will have several players from the 2019 U16 champion outfit who will now be aiming for silverware at the senior level. They last won the Schools Rugby League in 2016 under Kushan Indunil.

Known fondly as the ‘Green Machine’, Isipathana will be skippered this season by experienced loose forward Dahan Nithina Wickramarachchi, who was named ThePapare Player of the Match against this same opponent in 2020. Saliya Kumara is the Isipathana Head Coach while Dhanushka Botheju is working as the Forwards Coach.

Science had their best season in 2015 when they won the President’s Trophy beating Isipathana College in the final. Therefore, historically, this game has a lot of value. Amila Chathuranga (Kandy SC) will be serving as the Head Coach of the Science College Rugby team with Hansaka Lakshan leading the team from the all-important Number Eight position.

The pre-season favourites according to many pundits, St. Peter’s College is a well-drilled outfit including at least half a dozen players with 1st XV rugby experience. Sanath Martis’ Peterites will always have plenty of depth in their squad and should be a hard team to beat.

In 2019, the Peterites were second in the points table and then went onto win the President’s Trophy. This year too, they will be aiming for another stellar season under the leadership of centre Sudesh Jayawickrama, brother of former fly-half Sandesh Jayawickrama. The two vice-captains – prop/lock Chanupa Cooray and fly-half Windhya De Mel are touted to be game-changers with ball in hand.

The Rajans will rely heavily on their 10-12 combination of the co-captains Sawmya Wijesiri and Thenuka Wickramasinghe. Wijesiri, playing as a first five-eighth will be expected to put down points on the board. The fly-half represents the College football team as well and can kick from both feet. Wickramasinghe is solid in defence and poses a serious threat in attack too.

The Peterites will love playing in their home conditions but expect a tough fight from the Dharmaraja boys. The Rajans are coached by Lasintha De Costa.

St. Peter’s thumped Dharmaraja by 50-14 in the 2020 season opener in Bambalapitiya and will not settle for anything less whilst the visitors may have to play out of their skins to topple the opposition.

The Thomians have made the long trip to Pallekelle to play their arch-rivals Trinity College in their season opener, which is also a trophy encounter. Three months ago in Colombo, the Thomians regained the Canon R.S De Saram Shield winning a tight contest, 17-14 against the Trinitians.

The school by the sea will not have the services of plenty of senior players from that 2021 outfit, therefore the Trinitians will be eyeing sweet revenge in their own backyard.

Trinity skipper Lithmal Moragoda is a senior prefect at college and the athletics captain in school. Playing at center, Moragoda will depend heavily on the support of loose forward Chamendra Dhanapala, front row forwards – Loshika Wijekoon and Kaveesha Edama as well as fly-half Attab Manzil. Kavinda Jayasena functions as the Head Coach for Trinity while Pradeep Basnayake and Thusitha De Silva serve as Forwards and Assistant Coach respectively.

On the Thomian front, skipper Chariya Kurukulasuriya, will play at the pivotal number eight position. However, watch out for some counter-attacking skills from their back three in Jaden Koch, Averan Noah and Akira Perera. Yehan Bulathsinghalage will direct traffic at the fly-half position. The Thomian coaching unit consists of the experienced Shamly Nawaz as Head Coach, Asanga Rodrigo as the Backs Coach and Dilan Soyza as the Trainer.

It is fair to say that this current Wesley outfit will have plenty of hopes of winning the championship, considering that most of these boys were a part of the Champion U16 outfit in 2018 as well as the Runner-up squad in the same age category in 2019. The double blues can well be termed as the Dark Horses in the competition.

These two teams played each other to commence their 2020 season and Wesley came out on top with a fine 36-06 win. This season, full-back Tharusha Jayaweera has been named as Wesley captain. Keep a close eye on prop Hafiz Thabeeth, fly-half Shaveen Jayawardena and Shem Elisha.

In the absence of Krishan Wettasinghe, who has had to travel overseas due to a family commitment, Shehan Dias will work as the Head Coach. He will be supported by Saliya Handapangoda.

The Vidyartha squad will be coached by Nalin Wijesinghe, who knows the setup inside out. Experienced center Arosh Rathnayake is the captain of the Tigers side with several experienced campaigners such as prop Kavishka Kavinda and flanker Ishara Lakshan adding some impetus to their game.