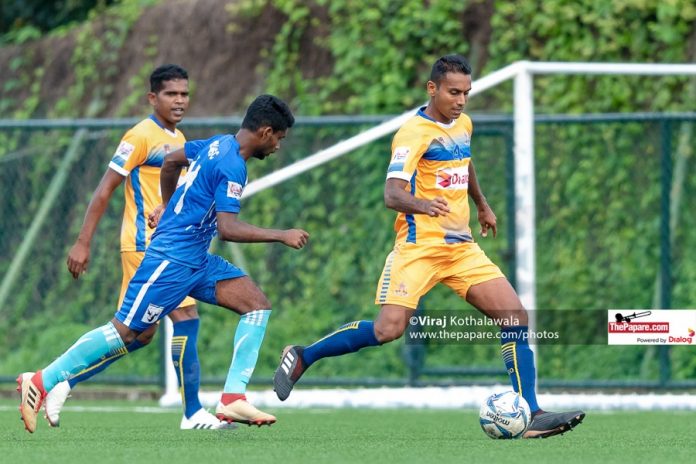 Defenders FC came out with a narrow 1-0 victory against Ratnam SC in the Week 4 clash of the Dialog Champions League 2018 played at the Beddegana Football Complex.

Ratnam came into this game after they drew 2-2 against Solid SC seated in 5th, while Defenders FC who came into the game on a very big high after winning their 3rd consecutive FA Cup title were in 7th place.

There were early chances for both sides, but they were both blasted well over the crossbar. Ratnam then came very close after Asikur Rahuman failed to clear the ball inside his own box, which allowed Dilhara Jayasekara to take a strike which flew just over the bar.

Ratnam were handed a huge blow when in the 15th minute their star forward Lobognon Didier had to be taken off having suffered a knee injury.

The game got quite physical, with plenty of hard tackles and fouls coming from both sides. Mohamed Aman gave Ratnam their first shot on target midway through the half with a strong effort, but Mohamed Luthfi reacted quickly and pulled off a good save.

Rahuman had a number of chances in the half but kept missing the target by narrow margins. He ended the half with a brilliant struck free-kick from range, but it came crashing back off the crossbar before being cleared.

The second half was just as physical, with both sides starting on the attack, but kept failing to break the deadlock.

Ratnam then got an opportunity when a free-kick struck into the box, had Luthfi, who had rushed off his line, beaten which led to a goal mouth scramble. Ratnam failed to capitalize however and the ball was cleared.

Ratnam skipper Sachmitha Maduranga handicapped his own team after a coming together with Rahuman saw them both go down where he unnecessarily stamped his foot down on his opponent. Referee G.M. Robesh, after consultation with his linesman showed Maduranga a second yellow, reducing Ratnam to 10 men.

Madushan De Silva then took shot from the edge of the box, but yet again it was fired wide. Rahuman continued to miscue his shots after Niroshan Pathirana found Rahuman with a cut back pass, but his effort was scuffed wide.

The Soldiers finally broke the deadlock in the 71st minute when Udaya Keerthi Kumara struck a brilliant free-kick which swerved in the air, confusing the Ratnam keeper, who initially went the wrong way and could not recover in time to keep it out.

Mohamed Issadeen had a golden opportunity to double the Soliders’ lead after getting an over the top pass to which he struck with a downward header. It was somehow scuffed as the ball bounced just in front of the goal before bouncing inches over the crossbar.

Y.L. Jayathunga had the final attack of the game which had the Ratnam keeper beaten, but Ehougban Metehan got back quick to clear it off the line.