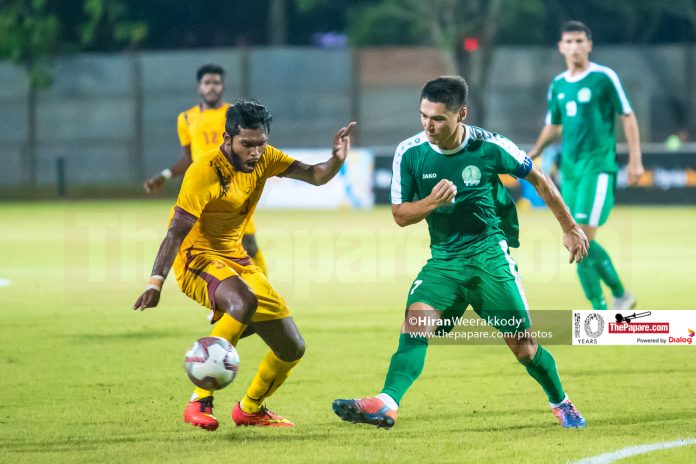 After opening the scoring through Orazsahedov, Turkmenistan went on to ensure all three points at the Colombo Racecourse Ground when Amanov fired home after the break to hand Ante Mise’s charges the ideal start to their latest bid for international success.

In the wake of their appearance at this year’s AFC Asian Cup in the United Arab Emirates, Turkmenistan were expected to shine in the Sri Lankan capital, and it was they who fashioned the game’s first genuine chance, forward Altymyrat Annadurdyyev turning in the box and having his third-minute shot from 12 yards smartly saved by goalkeeper Sujan Perera.

Turkmenistan’s early persistence was to be rewarded just five minutes later when Orazsahedov held off defender Duckson Puslas before expertly firing an angled drive past Perera.

Despite Turkmenistan’s initial dominance, Sri Lanka responded well through Kavindu Ishan who had a fierce effort turned around his post by visiting custodian Mammet Orazmuhammedow.

Not to be outdone, Orazsahedov then rattled the Sri Lankan bar on 28 minutes and, as the Central Asians threatened to extend their advantage ahead of the break, Amanov was first denied by a superb Perera save and then, following a magnificent strike from distance, the frame of the goal.

The pattern of play changed little in the second half, and one duly became two for Turkmenistan in the 53rd minute courtesy of an Amanov free-kick which found its way through the Sri Lankan wall and into the far corner of Perera’s net.

With Sri Lanka clearly tiring, the seemingly omnipresent Amanov fizzed a shot narrowly wide of the target and, in the game’s last noteworthy incident, substitute Murat Yakshiyev had a goal ruled out for offside after he converted the rebound following Perera’s save from yet another Amanov set piece.

The two sides will both be back in action on Tuesday with Turkmenistan scheduled to host Korea Republic in Ashgabat and Sri Lanka set to face table-topping DPR Korea on home soil.