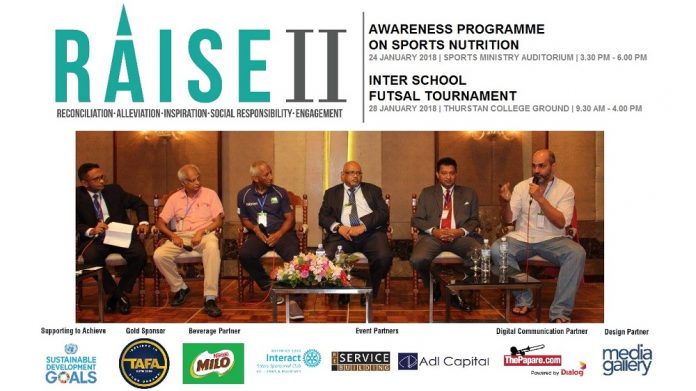 We often hear of the abuse of performance enhancing substances being used in school sport; with or without the knowledge of the coaches, trainers and parents.

This always arouses plenty of responses from various governing bodies related to sports in the country but, sadly, nothing noteworthy seems to come out of the initial indignation that is displayed. The games being played for ‘passion’ of the sport, thus maintaining a sense of camaraderie and ‘fair play’, has been replaced by a different mindset and the desire to “WIN at all costs”, most likely due to the intense competitive nature omnipresent in school sport.

UTO EduConsult Ltd is pleased to announce that, as part of its RAISE campaign, to host an awareness programme on the topic ‘NUTRITION VS SUPPLEMENT’ targeting school children above the age of 16. The RAISE awareness programme is scheduled to be held on the 24th of January 2018 at the Sports Ministry Auditorium – Colombo 7, in which discussions would revolve around the contemporary challenges faced by athletes and sportsmen and women, in general.

Dr Seevali Jayawickrema, Director General – Sri Lanka Anti-Doping Agency (SLADA) stated that “In 1991, at the SAF Games, which was held at the Sugathadasa Stadium in Sri Lanka, we did some tests for the first time. At that time dope testing was not so intense, though most athletes performed at international level. When Sri Lanka became the World Champions in Cricket, the focus was shifted to cricket. Since then we do these tests at random and we find that there are certain sports which are more susceptible to doping than others. Frequently people come out and inform us about the usage of these substances. So much so since around 2000, we have had about 65 such positive detections.”

Abdul Baasit Sathar, Project Chairman of RAISE II, opined that “Prohibited performance enhancing substance use is frequently being reported among school athletes but the associated risks are shunned with the intense competitive environment. Athletes rely on supplements to improve sports performance. However, the knowledge on the products they use tends to be limited without a doctor’s recommendation and risk remains with the athlete leaving their future in jeopardy.”

The Director General explained: “Nutrition is an essential part in a one’s performance and especially for school athletes it is crucial that they maintain a balanced diet. Whatever the food that you take you use it as energy. To gain speed, power, strength, agility, flexibility; all the components needed to be competitive – so nutrition is the key.”

The use of nutritional and sports supplements are common among school level athletes, also majority is aware of the risks. Join the discussion on the 24th of January 2018 with the expert panel of speakers to learn and also share your perspective. Free registration for school students above the age of 16, to confirm your participation contact, Abdul: 0779280789 or write to us on [email protected]. For online registration, visit: https://goo.gl/2pSGUL