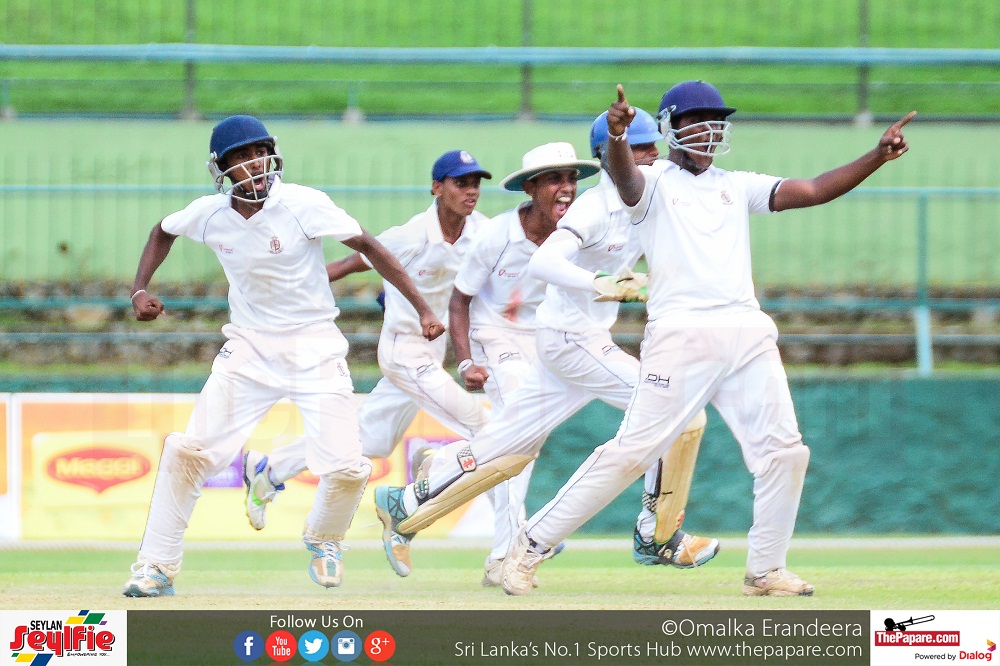 The 59th Battle of the Babes was played at Pallekalle International cricket stadium between Vidyartha College and St Sylvester’s College during the past two days.

Vidyartha was confident of their big matches chances as they had had a good season in the schools cricket arena thus far. Sylvester’s however came into the game as the under dogs.

After having won the toss, the Vidyartha captain chose to bowl first on a fresh Pallekalle pitch which hadn’t been used recently. The openers for St. Sylvester’s put on just the 23 runs for the opening partnership as Ravishka Upananda sent back the Sylvester openers early on.

Monjith Rajapakshe top scored for St. Sylvester’s with 40 runs. After a good morning session by the Vidyartha quicks, who exploited the seamy conditions with accuracy, Sylvester’s were bowled out for just 136 runs in 63 overs going at a run rate of just over 2 runs per over. In the bowling department Nimesh Senanayake was the most penetrative bowler, taking 3 wickets as his counter parts Kavindu Munaweera and Nimsara Athurugolla picked up 2 wickets each to dent the scoring rate.

Resuming shortly after tea the Vidyartha reply began with two back to back setbacks early in on in the innings. The first wicket fell with just 4 runs on the board. Thusith De Zoysa picked up the wicket by teasing the batsman just outside the off. Next the paceman Manuja Perera picked up the second wicket of Sahan Danwatte for 16 runs. At the end of the first day’s play the score read 37/2 with Vidyartha needing 99 runs more to secure a first innings victory.

Sylvester’s picked up early wickets at the start of the second day to push back the first innings of the Tigers. Vidyartha was pushed back to 45-5 when a good partnership for the 6th and 7th wickets saw them get past the 100 mark after lunch. Thusith De Zoysa and Manuja Perara were the only two bowlers among the wickets taking 3 and 2 wickets each respectively. Zoysa finished with figures of 4-21 at the end of play.

Rain stopped play during the middle of the second session. Vidyartha had at this point batted a total of 52 overs for their score of 104/8. The rain interrupted game was the called off as it continued to pour down heavily at Pallekalle.

This meant that neither team could secure due honors at the end of the battle, leaving it open for an exciting One Day game between the two sides next week again at Pallekalle.