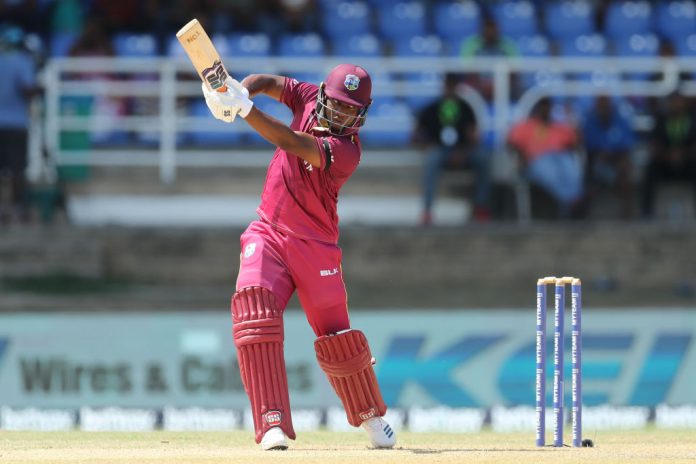 West Indies claimed a 3-0 series whitewash in St George’s thanks to four wickets from Hayden Walsh and a dominant 102 by Evin Lewis.

For the first time in the series Kieron Pollard won the toss, but he elected to once again field first. The opening bowlers made sure there was no quick start by the Irish openers, with Oshane Thomas’s short of a length bowling bringing the wicket of Paul Stirling for just five. Stirling scored just one from 13 deliveries he faced from Thomas. The same bowler claimed a second in his next over, James McCollum caught at short cover.

Ireland continued to struggle to break free, and Porterfield’s dismissal to Roston Chase for 10 in the 18th over left them teetering. Kevin O’Brien joined captain Andrew Balbirnie for a 37-run partnership, but he too was sent packing by Chase, for 21. Balbirnie built another pair of small but significant partnerships first with Lorcan Tucker (16, partnership of 23), and then Simi Singh (10, partnership of 42), bringing up his half century in the process. But when the skipper fell for 71, the second batsman to be dismissed by Hayden Walsh’s leg-spin, and was quickly followed Singh, Ireland were under threat of registering their lowest score of the series.

Andy McBrine however struck a 22-ball, unbeaten 25 and, with some support from Mark Adair, Barry McCarthy and Craig Young, added a further 45 for the last three wickets to leave the visitors all out for 203 in the 50th over. Walsh added the wicket of Adair to go with those of Tucker, Balbirnie and Singh to end with figures of 4/36 – the fourth best ODI figures by a West Indian bowler at this ground.

Evin Lewis was once again in no mood to hang around, and set off rapidly in pursuit of the target. Shai Hope and Sunil Ambris were dismissed early for six apiece, before Lewis found serious support in the form of Brandon King. Only a brief delay for a dog on the outfield slowed Lewis’s progress towards his half-century, and he brought up the landmark from only 41 balls.

King rattled along nicely himself until on 38 he feathered a cut off McBrine through to Tucker’s gloves. But Lewis still held firm and was accompanied by Nicholas Pooran through to a brief rain delay, with the pair returning afterwards to chase a slightly reduced target. There was some late cat and mouse as Pooran avoided finishing things too quickly and depriving Lewis of another century opportunity.

The West Indian opener eventually passed the hundred mark with a pull for four, but holed out to long off next ball with five runs still needed. Romario Shepherd followed suit next over having added just a single. But Pooran finished things with his sixth boundary in the following over, ending with 43*.