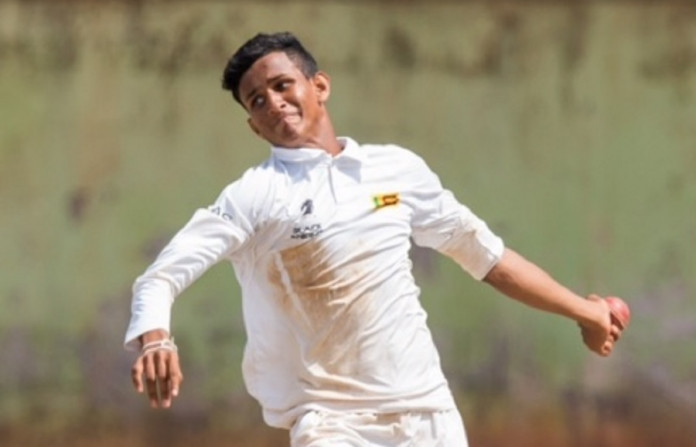 Left arm tweaker Praveen Jayawickrama starred with a six wicket haul as the Sri Lanka U19s managed to salvage a draw in their three day game against the Australia U19s which concluded in Hobart today.

The Sri Lanka U19s showed brilliant resilience as they held firm to salvage a draw on the final day in Hobart. It all began when Nipun Ransika lifted the first innings total to 184 almost on his own while also averting the follow on, as he smashed his way to 31 off just 33 balls after the Lankans resumed day three on 149/9.

The Australian U19s were pushing hard for a win and came out in search of quick runs but they were pegged back by a brilliant spell of left arm orthodox bowling by Praveen Jayawickrama. He picked up 6 wickets in just 9 overs while he also managed to keep the run rate in check as the Australians were reduced to 142/8 declared in their second innings.

In pursuit of 268 to win the game, the Lankans lost wickets at regular intervals but skipper Kamindu Mendis stood out as he defied the Australian bowlers for a long time as he battled his way to 41 while also consuming 104 deliveries. Left handed batsman Nipun Sumanasinghe also looked in good touch as he remained unbeaten on 31 off just 36 balls striking four boundaries during his stay.

The Sri Lankans held on for 56 overs as they ended the day on 201/7 while Ryan Hadley was the pick of the bowlers for the hosts as he bowled a hostile spell of fast bowling picking up 4/41.