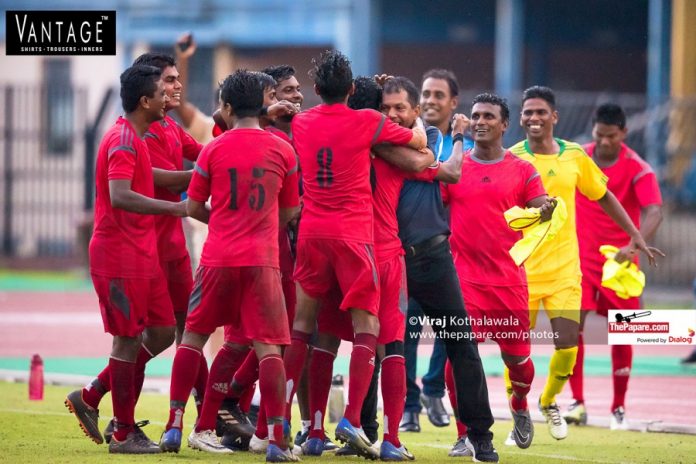 Police SC huffed and puffed but finally managed to win with the last shot of the game against Moragasmulla SC 2-1 in the Premier League Division I 2018, week 2 of the Super Six round played at Kelaniya Football Complex.

Police SC came into the second game of Super 6 after a 3-1 win against St. Mary’s while Moragasmulla SC had to settle for a 3-3 draw against New Star SC.

The game was kicked off with Police having the early go, however the first opportunity came to Moragasmulla in the form of a corner. G.R. Piyawansha rising above all looped the header over Mahendran Dinesh to give an early lead to Moragasmulla.

Police were the better team, despite going a goal down early however they were not able create a clear-cut opening as the front three of Riyaz Ahamed, Shabeer Razooniya and Mohamed Shufaik did not click in the final third.

It was Chathura Gunarathna who equalized for the Cops after some good build up play as he curled the ball around the keeper from the top of the box.

Moragasmulla were unable to get into the game and had R.C Jeremie upfront as the lone striker without much support from the midfield. Police SC too were not up to the mark with their passing and movement, making the game scrappy.

Jeremie was a constant threat for the Police defense as he made runs, taking couple of defenders with him, thus creating space for the other players to attack.

Rifkhan Mohamed then got an opportunity after a good through ball from Razooniya. Rifkhan took the wrong option of turning back rather than taking a shot at goal from close range.

At the start of the second half Sachith Pathirana got L.P Perera to make a save with a direct free kick which was on target. In the following play Shabeer Razooniya had a shot which was also saved by Perera.

The Moragasmulla team were better in the second half, keeping hold of the ball as Police constantly made errors giving the ball away cheaply. The front three for Police looked isolated without much service from the midfield.

Mahendran Dinesh then made a save in the near post off a shot from Jeremie, the latter finding space behind the Police defense.

Razooniya then found himself free inside the opposing half after a long clearance reached him. As he tried to lob over the on-rushing keeper Perera, he only managed to hit it wide to the dismay of his bench.

Police SC couldn’t break the resolute Moragasmulla defense who held their lines and played no nonsense football in the back.

However, in stoppage time Rifkhan got the winner out of nowhere as the goalkeeper Perera and the defender went for the same ball. Rifkhan’s awareness made the goal possible as he flicked it over the keeper to give the Cops the win.