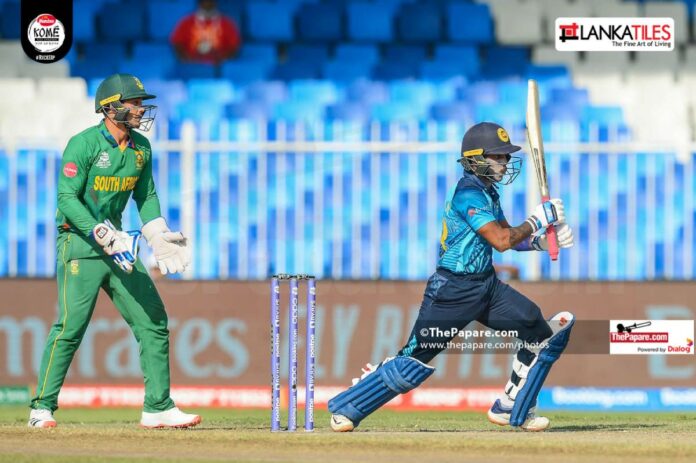 As the mentor of the Sri Lanka team for the ICC Men’s T20 World Cup 2021, one of Mahela Jayawardene’s major changes was getting Pathum Nissanka to open the batting with Kusal Perera. Nissanka’s main duty was to drop anchor and play the 20-over game, while the rest of the batters accelerated around him. The 23-year old has already performed beyond expectations in the UAE.

The manner in which Nissanka took on the Protea attack and batted on Saturday at Sharjah to anchor the innings with a brilliant 72 off 58 balls, proved that Jayawardene’s theory of adding Nissanka to the top order has paid off. He scored more than 50% of the Sri Lankan runs, ensuring that Sri Lanka got to a total they could hope to defend.

“We lost a few wickets early and I wanted to bat deep. Targeted the last five overs to score some runs. We wanted to get 160. Later, realized the wicket was a bit slow and then decided to get something in the range of 140 to 145. The coach [Mickey Arthur] wanted me to bat till the 20th over because on that pitch, it was tough for a new batsman to get set immediately. ”  Nissanka told the Sri Lankan journalists covering the 16-team competition in a virtual media interaction.

After 6 innings, Pathum Nissanka is currently the highest run-scorer in the ICC Men’s T20 World Cup 2021 with 169 runs at a strike-rate of 115 and an average of 28.16. The biggest surprise is that he was not even in the Sri Lankan team reserves list for the T20 World Cup a month ago.

Barring one game against India in July, which he played but didn’t get to bat, Nissanka was not even considered for the last two T20 series’ at home. Players like Nissanka should be persisted with over a period of time as he’s got everything you need from a modern-day batter. His timing is exquisite and he can play both seam and spin quite well.

The talented, diminutive right-hander, who hails from Kalutara, has played 4 Tests, 9 ODIs and 10 T20Is since making his international debut earlier this year. He does not possess world-class numbers yet but has proven already that he could be a worthy investment for the future of Sri Lankan Cricket.

“Playing all three formats is not easy. It is tough. You need to maintain excellent fitness levels and train so much. “ He further stated.

Needing 22 runs from 9 balls, Kagiso Rabada and David Miller soaked in the pressure to smash 3 sixes and 1 four to chase the Sri Lankan score of 142 with four wickets and one ball to spare. Despite the heavy criticism directed towards Lahiru Kumara on social media, who gave away 15 runs in the final over, Nissanka defended his fellow team-mate and the decision of the captain to employ Kumara.

Read more – Can Sri Lanka still qualify for the Semis? If so, how?

“Lahiru [Kumara] had bowled well up until that last over so we backed him to bowl the last over. We were certainly hoping he would do the job for us but he made a few errors. These things can happen in cricket. “ He said.

Sri Lanka will be playing England today at Sharjah (1st of November), which will be a do-or-die battle, if they want to have any chance of making the semis. The 2019 Cricket World Cup champions, England, led by Eoin Morgan have brushed aside their three opponents– West Indies, Bangladesh and Australia, so far quite comprehensively. Sri Lanka’s final Super 12 match will be against the Windies on 4th of November in Abu Dhabi.

“We hope to finish well. We want to win the next two games and try and see whether we can reach the semis.” Nissanka said.

Taking on England’s superlative bowling attack will not be an easy challenge for Nissanka. But, if Sri Lanka are to spring a surprise, onus will be on the right-handed 23-year batter to continue to accumulate crucial runs at the top of the order for the islanders.