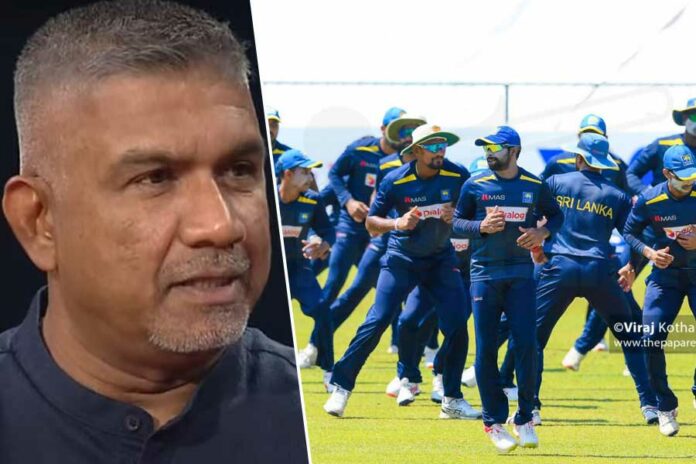 Chief Selector Pramodya Wickramasinghe is confident that the Sri Lanka Men’s Cricket Team can gain automatic qualification for the 2023 ODI World Cup which is set to be held in India.

The chairman of the National Selection Committee believes that the teams they have selected for ODI series against Bangladesh and England will pave the path towards achieving the objective of getting automatic qualification for the World Cup.

“The head coach Mickey Arthur has a plan, and we are going according to that. It’s like 50-50 to build a side for the World Cup as well as to try and qualify for a place automatically. We have 18 matches in hand, and we need to win at least 11 of them to qualify, some of the matches are going to be played in Sri Lanka. We are trying to somehow achieve that target,” Wickramasinghe said in an interview with Daily FT.

Wickramsinghe also emphasized that though the current national team is considered a young one, they have enough experience at the international stage.

“In the present ODI side there is experience. In the first two matches against Bangladesh the only two new players were Ashen Bandara and Pathum Nissanka, the rest have played white ball cricket since 2015. There is experience in the side it is only now that the players are beginning to take some responsibility and play. In another three years, this lot will have the experience that is required,” Wickramasinghe explained.

He also said that the toss played a crucial role in the Bangladesh series and he reckons had Sri Lanka won the toss in the first two games, they could have won the series as well.

“If you actually summarize the ODIs in Bangladesh, if we had won the toss in the first two matches, we would have won the series. Even with all the experience they have, Bangladesh still could not score 200 in the third ODI. We must think positively. Our team is gelling well, they are taking on responsibility. When I spoke to them before the third ODI they were confident that they could win if they won the toss. The players understand the roles required from them. I have confidence that, in time to come, we will have a very strong white ball team,” Wickramasinghe added.

The chief selector also said that the captaincy will be reviewed after the conclusion of the England tour.

“We gave Kusal two tours to Bangladesh and England and told him to continue as captain without breaking the format. After the completion of the England tour, we will review the captaincy. He has areas to improve as captain, we will closely monitor him during the England series and then arrive at a decision,” he said.

On the selection of young spinner Praveen Jayawickrama for limited over cricket, Wickramsinghe said that he was chosen mainly to give him some exposure to English conditions.

“If you look at Praveen’s record in the recent domestic season, he has performed well in T20 cricket, so it is not fair to immediately label him only as a Test player. As we can take 24 players, we have picked him for England to keep him in the squad and to give him exposure. Regardless of whether he is selected to play or not he can get used to bowling in English conditions. We are giving him that opportunity. If required we will play him, but it’s a learning curve for him.” Wickramasinghe further added.