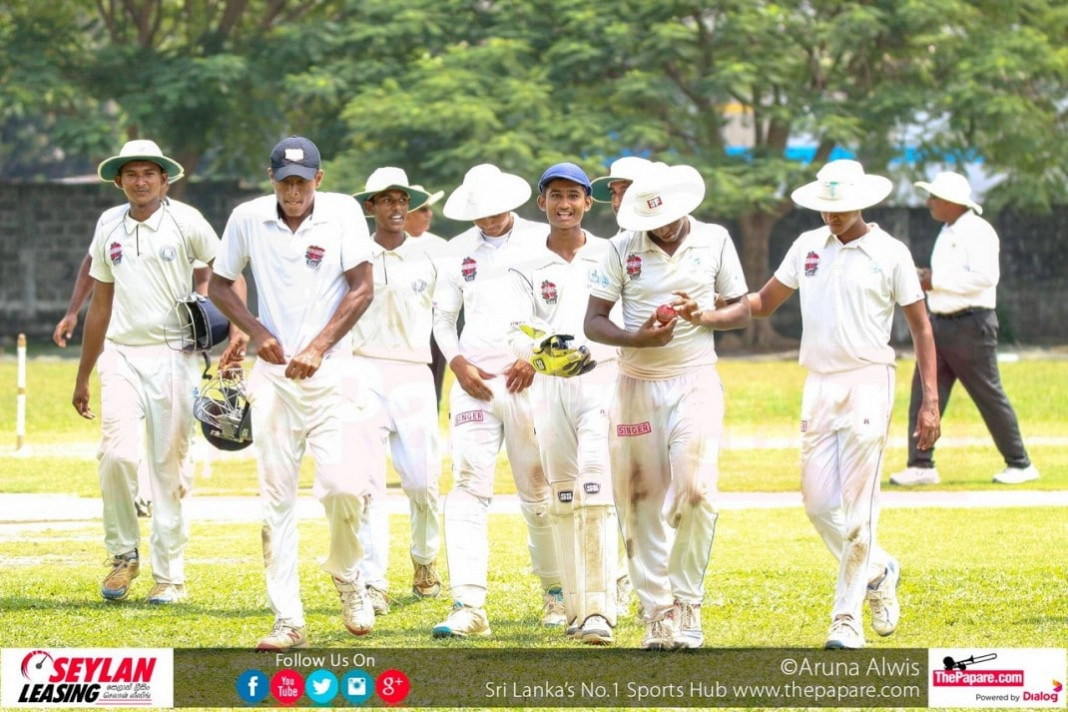 Here’s a look into a few matches which concluded today in the Singer U19 Division I Cricket Tournament.

Dulaj Ranatunga’s 118 helped Maliyadeva secure first innings points in their group D encounter against St Joseph’s College today in Kurunegala. Maliyadeva resumed play at 62 for 1 on day 2. Dhananjaya Premarathna and Ranatunga put up a brilliant partnership to help Maliyadeva take the upper hand in the morning session. Premarathna was unfortunately dismissed for 68 but Ranathunga went on to score a game changing century for the home side. He found good support from Kaveen Bandara who scored a valuable 65. Maliyadeva posted a mammoth 403 for 7 in 104.4 overs before they declared their innings. At stumps on day 2, Joes were 38 for no loss in 8 overs. Maliyadewa secured first innings points in a crucial game.

Early on, Joes made 300 for 9 for their first innings after electing to bat first. Left handed opening batsman Revan Kelly scored 91 while there were good contributions from the middle order which helped them reach the 300-run mark.

The Peterites pulled off a close first innings victory against Nalanda College in their Group A encounter at Bambalapitiya. Nalanda were 118 for 7 at stumps, trailing by just 30 runs. But the Peterite bowling attack managed to take the remaining three wickets and clean up the visitors for just 133 runs. Right arm spinner Sachin Silva bagged 4 for 21 while vice-captain Manelkar De Silva took 2 for 20. The home side came on to bat in the first session itself and they were looking good at lunch with 83 runs on board for the loss of 3 wickets. But the second session Nalandians came back into the game with quick wickets and ultimately cleaning them up for just 184 runs. Santhush Gunathilake was yet again the lone hero for the Peterites with 39 runs. Nalanda was given a target of 191 but there wasn’t much time left in the game and they were 50 for 3 at stumps on day 2.

Early on, the Peterites were bowled out for a paltry 136 thanks to a five-for from Kalana Perera. Santhush Gunathilake top scored with 48 for St Peter’s.

Bens registered a close win against Zahira College in their traditional encounter at Kotahena. They were in demanding position at stumps with 105 runs on board for the loss of 5 wickets. The rest of the five wickets fell for just 31 runs as the Zahira bowling attack brought their team back into the game. Bens were bowled out for just 136 which put the game in the balance. Zahira came on to bat but they were yet again put under immense pressure by Kaveesh Jayathilake who took a five-for which helped his team to bundle out their opponents for just 124 runs. Sajith Sameera top scored with 42 for Zahira.

With 125 run target ahead of them, Bens came on to bat in the second session of day 2. Thanks to brilliant knock by Dulantha Lewis, they got over the line with 3 wickets in hand. Dulantha scored with a match winning 62 to help his team win a nail biter.

Thomians registered an easy 8 wicket victory against Dharmashoka in their Group C encounter at Mt Lavinia. At stumps Dharmashoka were 42 for 1 in their second innings. The Thomian bowlers didn’t take much time to clean up the remaining nine wickets. Pavith Rathnayake, Ravindu Kodithuwakku and Dulip Gunarathane shared 3 wickets each as the visitors were cleaned up for just 91 runs.

With a target of 42 ahead of them, Thomians got there in canter. They lost only two wickets and they got to the target in just 12 overs resulting in a convincing 8 wicket victory for the Thomians.

Early on, Dharmashoka won the toss and elected to bat first. They made only 91 runs as Pavith Rathnayake and Dellow Peiris took 4 wickets each for S Thomas’. In reply, the home side posted 146 with a brilliant 72 by Kavindu Kodithuwakku. Kavindu Nadeesha took 6 for 35 for the boys from Amabalngoda.