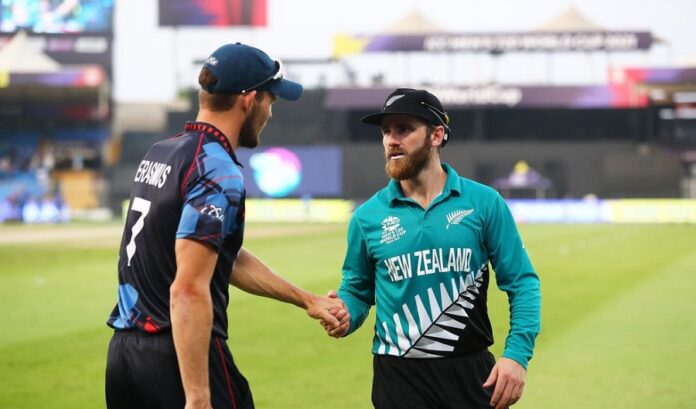 New Zealand put on a thorough all-round performance to beat Namibia in the first Group 2 clash of the day in Sharjah in the ICC Men’s T20 World Cup.

The 52-run win helps New Zealand leapfrog Afghanistan to the second spot in the Group 2 standings.

Chasing 164, Namibia were unable to take advantage of the fielding restrictions as the New Zealand pacers kept a leash on the scoring. They eventually reaped the rewards, scalping three wickets after the Powerplay as the pressure kept building.

After Namibia pulled it back in the middle overs with quick wickets of Kane Williamson and Devon Conway, Neesham and Phillips’ unbeaten 76 run partnership helped them finish strong.

Martin Guptill picked up from where he left off in the game against Scotland, making his intent clear with a six off Bernard Scholtz in the first over.

Ruben Trumpelmann wasn’t spared either, as Guptill walked down the track and smashed him straight back.

It was Namibia’s go-to man, David Wiese, who dealt the Black Caps the first blow. Guptill, trying to go for another big one, was done by the lack of pace, skying the ball to the hands of Trumpelmann at mid-off.

Kane Williamson and Mitchell struck a boundary each in the last two overs of the Powerplay but the latter perished as soon as the fielding restrictions were lifted. Mitchell gave Scholtz the charge but managed to slice it to deep point, where Michael van Lingen had to cover a lot of ground to take a fantastic diving catch.

Just as Kiwis were wrestling control back, Gerhard Erasmus got his opposite number as Williamson, in the bid to up the ante after the drinks break, dragged on to his stumps.

Devon Conway was the next to make the long walk back. Trying to steal a two after dabbing it to the mid-wicket region, Conway was caught short at the non-striker’s end, with Birkenstock knocking the stumps over after a brilliant throw from Erasmus in the deep.

The two wickets in two overs pegged New Zealand back further, with Glenn Phillips and Jimmy Neesham tasked with the job of steadying the ship.

Namibia bowlers kept the lid on the scoring in the middle overs, but were punished in the death for staying in this line and length.

Erasmus was guilty of gifting a full toss to Phillips, who dispatched it over the ropes. Neesham and Phillips ruined David Wiese figures in his last over, smashing him for two sixes and a four.

With the momentum now in their favour, New Zealand kept finding the boundaries as the duo of Neesham and Phillips finished with an unbeaten partnership of 76 from just 41 balls. While Trumpelmann leaked a six and a four in the penultimate over, Smit gave away 16 in the last over, which included a six and four wides.

Both the teams are mathematically in with a shout for semi-final places, though a loss for Namibia would see them out of the reckoning. A win for New Zealand would see them leapfrog Afghanistan to the second spot in the Group 1 standings, though would still not guarantee them a spot in the final four.

New Zealand pacers were on the money from the very beginning, as they gave away just two boundaries in the first five overs. Michael van Lingen struck a six and a four in the sixth over to make a better reading of the scoreboard at the end of the Powerplay.

However, with the asking rate rising quickly, the pressure got to Namibia as they lost their top 3, including their captain, inside the first 10 overs.

Neesham rattled the stumps of van Lingen to give New Zealand the breakthrough they were looking for.

The spinners then got in on the act, first with Santner dismissing Stephen Baard before Ish Sodhi nicking captain Gerhard Erasmus out.

With wickets falling, New Zealand continued to turn the screws, making run-scoring even more difficult for Namibia, who, at the halfway stage, needed 108 runs in the last 10 overs.

There was some joy for Namibia as David Wiese and Zane Green smashed Ish Sodhi for a six each, but it was short-lived. Southee, brought back into the attack, trapped Wiese in front of the stumps for 16 to further dent Namibia’s chances.

There was no coming back for Namibia after that. Though Green and Smit found a boundary each, it was never going to be enough, with the asking rate already over 15.

Southee returned for his final over and scalped the wicket of Green after being hit for a four. In the penultimate over, Boult picked up the wickets of Jan Nicol Loftie-Eaton and Craig Williams for a duck.