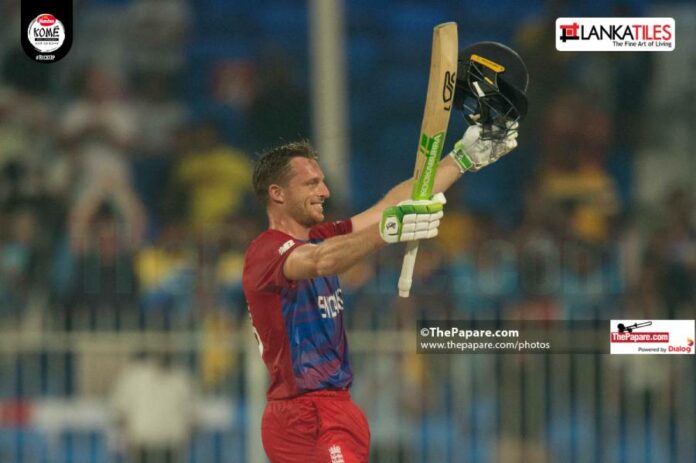 Buttler’s maiden T20I century steered England to a reasonable 163 for 4 after an early stutter. Buttler and skipper Eoin Morgan added 112 runs for the 4th wicket which made the difference. Despite some late hitting by the middle order, Sri Lanka could not get over the line as they were bowled out for 137 with 6 balls to spare.

Earlier, both teams made no changes After the England openers, Jason Roy and Buttler collected 12 runs in the first over, Sri Lanka had to bring their trump card, Wanindu Hasaranga to the attack in the second over. Hasaranga struck immediately as Roy attempted a slog sweep and got his stumps rattled to make it 13 for 1.

With Sri Lanka bowling tight lines, England found run-scoring tough on a pitch which was unaccustomed for the English batters. One-drop batter Dawid Malan was clean bowled by Dushmantha Chameera in the 5th over as England’s struggles in adjusting to the pace of the pitch continued.

Hasaranga, bowling his second over, last in the powerplay, trapped Jonny Bairstow plumb in front in the very first ball he faced with the help of DRS as the pre-tournament favourites were in deep trouble at 35 for 3.

Soon after the powerplay ended, Sri Lanka sneaked in some quiet overs to keep Buttler and skipper Eoin Morgan quiet as England were 47 for 3 at the half-way stage.

As Buttler and Morgan, doubled their first 10 overs score in the next 5 overs, Sri Lanka lost the plot against two quality batters. Buttler reached his fifty in 45 balls, the slowest of his career. Lahiru Kumara gave away three sixes in his final over, leaking 22 runs in the 15th over.

Buttler and Morgan added 112 runs for the 4th wicket as the pair cut loose in the death overs as Sri Lanka’s inexperience was exposed. Hasaranga completed his spell in the 19th over, dismissed Morgan for 40 to end with brilliant figures of 3 for 21. However, Buttler continued his carnage till the end to bring up his maiden T20I hundred with a six in the final ball off Chameera. Sri Lanka gave away 116 runs in the last 10 overs as England cashed in the latter overs.

Sri Lanka got off to the worst possible start in their chase when Pathum Nissanka was short of his crease while attempting a quick single in the first over. Man-in-form Charith Asalanka blitzed his way to 21 off 16 balls but was undone by the guile of leg-spinner Adil Rashid. Senior player Kusal Perera’s horrid run in the tournament continued as he too tried to hit out Rashid but managed only to top-edge to Morgan, who was running backwards.

Sri Lanka were 3 down for 40 runs at the end of the powerplay. Avishka Fernando was caught plumb in front by Chris Jordan as the islanders were in a spot of bother at 57 for 4 in the 9th over.

Bhanuka Rajapaksa hit 2 sixes and 2 fours during his 18-ball 26 but tried to hit one too many shots as he holed out to deep long-on as Sri Lanka lost half of their side for just 76 runs with little more than 9 overs remaining.

Left-arm seamer Tymal Mills walking off the field midway through his 2nd over, put England bowling plans in jeopardy as the dew set in.

Hasaranga, walked in at number seven and played a gem of an innings to give Sri Lanka a chance. He struck 3 fours and 1 six before a brilliant running catch by Jason Roy and substitute fielder Sam Billings ended the 53-run sixth wicket stand. A few balls later, skipper Shanaka wandered outside the crease, trying to sneak in a single but Buttler hit the stumps to make it 130 for 7. The Lankan tail was wiped off with an over to spare by the superior English attack.

Sri Lanka’s final game in the Super 12 stage will be played in Abu Dhabi on the 4th of November against West Indies.