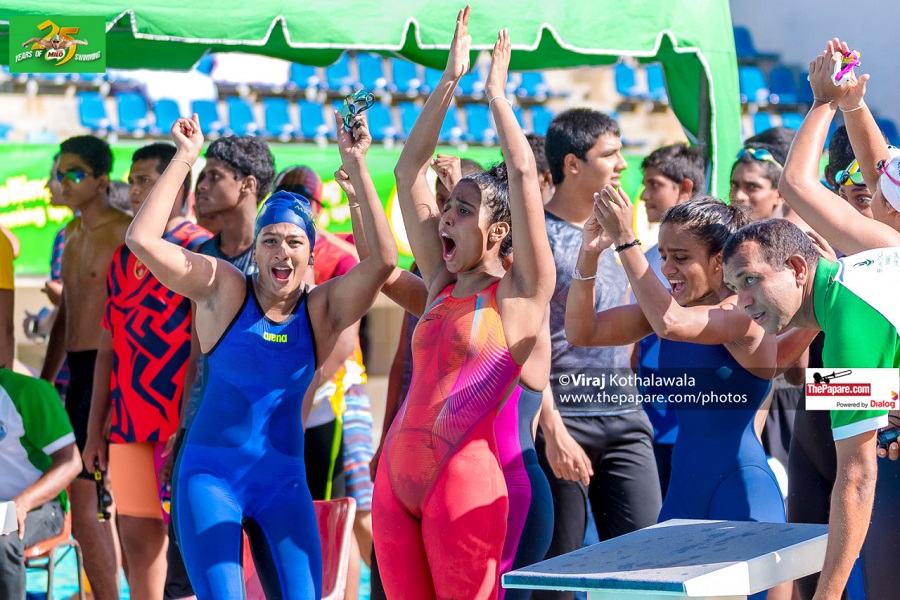 The waters of Sugathadasa will open for one last time this year as the National and Junior National Aquatic Championship is set to commence on the 1st of November, at the Sugathadasa Indoor Swimming Complex.

Olympic Medalist in the making?

Organized annually, the National and Junior National Aquatic Championship is the main long course meet staged by the Sri Lanka Aquatic Sports Union that sees the participation of both school and club swimmers.

Annually over 3000 swimmers make their way to Sugathdasa to partake in the competition spanning over 4 days and 22 different events.

The tournament will be run in two segments; junior and senior. In the junior nationals, it was the newcomers Lyceum Wattala that clinched the girls’ title whereas Royal College took the boys last year.

Last year’s winners in the senior women’s category, Mahamaya Girls’ School from Kandy will be looking to retain the silverware. Having won the All Island Schools Swimming championship for the 20th successive occasion, the Mayans will be out to finish off the season in style.

Their competition, Visakha Vidyalaya, who missed out the top podium finish by just 4 points last year, will be eyeing the title this November. The Visakhians last won it in 2016.

The 17-year-old Ramudi Samarakoon will be key for the Visakhians when they try to conquer the Mayan rule in the waters and will look to retain her best swimmer silverware.

The undisputed winners in the men’s category, Killer Whale Aquatics will be eyeing another title run this year. A representation of school swimmers and past schools’ swimmers, Killer Whale has the likes of Kyle Abeysinghe in their ranks.

Winning three golds last year, Abeysinghe was adjudged the best swimmer in the competition and will be looking to retain his personal performance. Killer Whale will be expecting stiff competition from the Josephians who already have the schools swimming title under their belts.

Akalanka reaches the elite 10 in the world at YOG2018

Returning from Buenos Aires finishing 10th in the world, Akalanka Peiris of St. Peter’s College will be waiting patiently till the events begin. Akalanka is set to swim the 100m backstroke as well as the 50m backstroke and will give stiff competition for the best swimmer title.

Stay logged on to ThePapare for exclusive reporting through Photos, articles and videos from the Sugathadasa Stadium from the 1st to the 4th of November 2018.