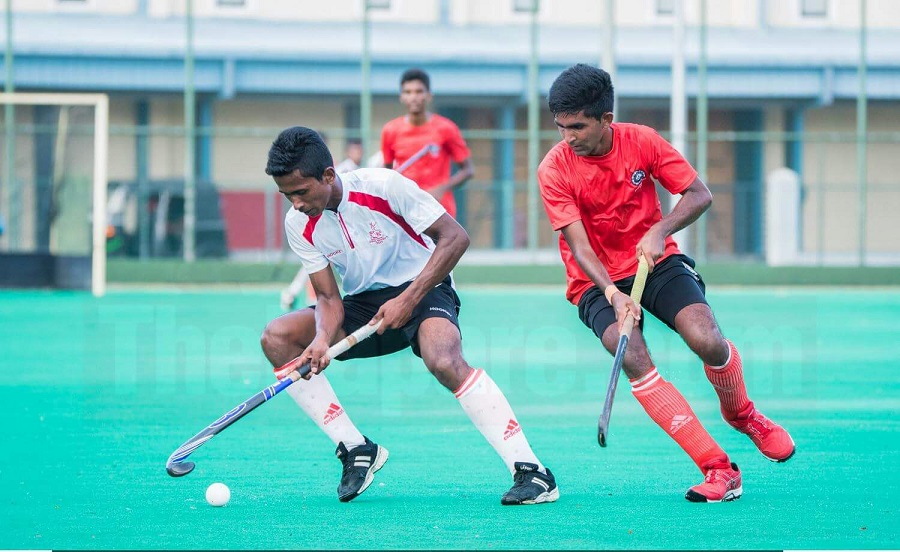 The 33rd annual School’s National Sports games which is organized by the Sri Lanka Sports Ministry together with the  Education Ministry started off  today at the Astro turf. In this year’s competition there will be more than 25 girls and boys teams participating in the tournament and matches will be played on knock-out basis.

The first boy’s category quarter final match took place between Nalanda College and St. Thomas Matale. Since both teams were very well prepared for this match from yesterday, it was one of the most fast paced matches that took place in the day. As the match started Ranathunga of STC Matale scored their first goal by implementing some  first class offensive strategies. Nalanda made inroads in the final half and Bodhika Dias of Nalanda scored two goals in a row for his team and took the lead. However, Nalanda could not control the pressure from STC and STC Matale scored  one more goal and the match ended as 2-2. Both teams were awarded 5 penalty strokes but to decide the winner of the match further 4 penalty strokes were awarded. Finally, Nalanda Collge won the match by getting all 9 penalty strokes in. Unfortunately, STC was only able to get 8 of their penalty strokes in.

In the following match, S. Thomas’ Mount Lavinia overcame Zahira Matale easily. Nallaperuma of STC scored two open goals inside the D for his team while Dias and Ellepola scored one goal each for their team. Zahira Matale seemed to be unsettled from the start of the match therefore, it was easy for STC to overcome the Zahira defence. The match ended as 4-0 which meant STC qualified for the semi-final round.

In the girls category, Janadipathi Balika Vidayala scored four goals against Holy Family Convent Wennappuwa in the first quarter final and HFC was only able to get one goal. The match between Seethadevi Girls College Kandy and Musaeus College ended as 2-0 in favour of Seethadevi and they qualified for the next important round in the tournament.   The next match between Visakha Vidyala Colombo and St. Anthony’s Girls College, was interrupted by bad weather and ended in a draw.   Both teams were awarded five penalty corners. St. Anthonys Girls College Kandy was able to win the match by 3-2.

The semi-finals matches will be played tomorrow at Astro turf and the teams which qualified in the girls category would be Janadipathi Balika Vidyala Nawala, Seethadevi Girls College Kandy, St. Anthony’s Girls College Kandy and Sri Sumangala Balika Vidyalaya Panadura. In the boys category, Nalanda College, S. Thomas’ Mount Lavinia, St. Joseph Vaz Wennapuwa will compete against each other in the semi-final round.