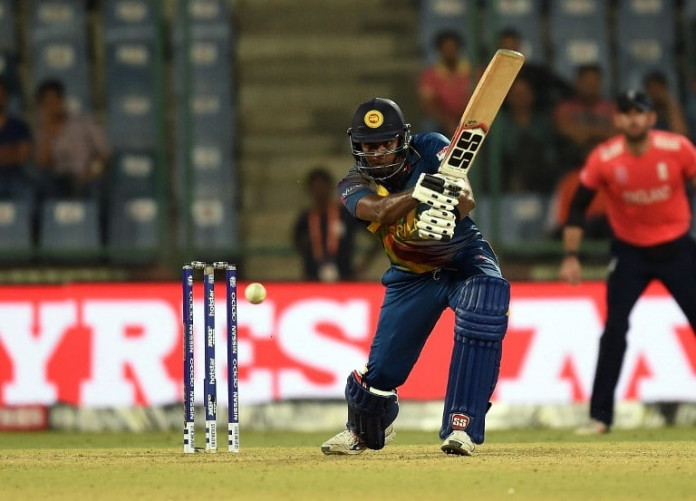 Angelo Mathews played an incredibly gutsy innings for the Sri Lankans, who seemed to be down and out at one stage of the game, to give England a real scare in their Group 1 encounter at the Feroz Shah Kotla earlier today. Mathews made 73 off 52 deliveries, to bring Sri Lanka to the brink of what would have been a record chase but England prevailed by 10 runs to knock both Sri Lanka and South Africa out of the tournament while booking their spot in the semi-finals of the World Twenty20.

Mathews won the toss and elected to field first, perhaps keeping in mind Sri Lanka’s lack of death bowling options. They opted to bombard the English with spin early on, bring on veteran Rangana Herath to open the bowling alongside Mathews and he produced a ripper first off, beating Alex Hales all ends up. Unable to get off strike, Hales tried an expansive sweep and was caught in front 3 deliveries later, to give Sri Lanka the early breakthrough they would have been hoping for. Joe Root then joined Jason Roy at the crease and the two batted sensibly to put on 61 off just over 8 overs to set a solid base to the England innings. Jeffrey Vandersay, who has really proved his worth over the last two performances, made the breakthrough in the 11th over when Root pulled a rank long-hop straight to the waiting hands of Lahiru Thririmanne at deep mid-wicket. English skipper Eoin Morgan pushed Jos Buttler ahead of him the batting order and the swashbuckling wicketkeeper did not disappoint, finding the boundary almost at will. Vandersay struck again in the13th over when he had Roy out LBW for 42. The batsman seemed livid at the umpire but replays showed that the right decision had been made.

By the 15 over mark, the Lankans would have been quite pleased with restricting England to 99/3. However in doing so, Mathews had bowled out himself as well as Herath and Vandersay. Thisara Perera was entrusted with the death bowling alongside Dushmantha Chameera and Mathews’ decision backfired as Perera went for 18 off the 16th over. It was all downhill from there as the Buttler took a liking to the medium pace on offer. Dasun Shanaka, who replaced Nuwan Kulasekara in the line-up for this game, was thrown in the deep end by Mathews, having to bowl the 18th over. He went for 15 as Buttler and Morgan took 72 off the last 5 overs. Buttler finished unbeaten on 66 off 37 deliveries; his innings included 8 fours and two massive sixes, leading England to 171/5.

Sri Lanka’s fielding seemed better than it had been during the past few games but they will still rue the fact that they leaked so many runs in the death overs. Vandersay was impressive once again, picking up 2/26 while Herath finished with 1/27.

Chasing 172, one would have felt that the only way Sri Lanka were going to get there was if TM Dilshan fired. Unfortunately for the veteran, he fell for England’s leg-side trap in the very 1st over of the innings, his flick finding the man at deep square leg. Dinesh Chandimal walked across his stumps and guided the ball into the hands of Buttler in the very next over. Milinda Siriwardene was pushed to number 3 but he seemed all at sea against David Willey, who managed to get the ball to move around. Siriwardene smashed him for a six but was caught out on the edge of the circle as he tried to lift Willey over extra cover. Things only got worse for the Sri Lankans as Mathews delayed call left Thirimanne struggling to get back into his crease; Ben Stokes’ diving underarm flick catching him short. At 15/4, the game was all but done as Mathews and Chamara Kapugedara were forced to see off the next few overs without taking too many risks. The pair’s 50 run partnership came off 50 deliveries but at the introduction of spin, Mathews took the game into his own hands. Adil Rashid’s 1st over went for 10 but 3 sixes in the next over meant that the leggie ended the night with figures of 31/0 off 2 overs. Kapugedara too joined the party, smashing a six over extra cover and then putting away Liam Plunkett to the square leg boundary. He fell in the same over however, leaving Sri Lanka to get 77 off 42 deliveries. The Lions would definitely have been glad they played the extra batter today as with Perera and Shanaka to come, the total seemed gettable. Moeen Ali too got the Mathews treatment, going for 32 off his 2 over spell.

Perera was looking really dangerous on one end but toe ended the last delivery of the 17th over straight to mid-off. Sri Lanka now needed 34 off 3 overs and after a few swings and misses, Shanaka began finding the middle of his bat. He smashed Willey for a six and a four in the 18th over as it went for 12. Needing 22 off the last two, Mathews took a single and gave Shanaka the license to go after the bowling. He played a splendid shot to somehow dig out a Jordan Yorker and send it to the third man boundary. The next delivery he smashed right off the meat of the bat only to have Root pull off a sensational catch at mid-off. Just an inch here or there it would have been a completely different story for the youngster. Jordan bowled Herath in the final delivery of the 19th over to leave Sri Lanka needing 15 off the last over. It proved to be too much for Mathews, who was by now pretty much batting on one leg as he denied singles to keep strike. Sri Lanka ended up falling short by 10 runs as England secured only their 2nd ever semi-final berth at WT20s.

Even though Sri Lanka and South Africa will face off on the 28th, it will be of no real significance as the two teams make their exit from the event.

Did not bat: Chameera