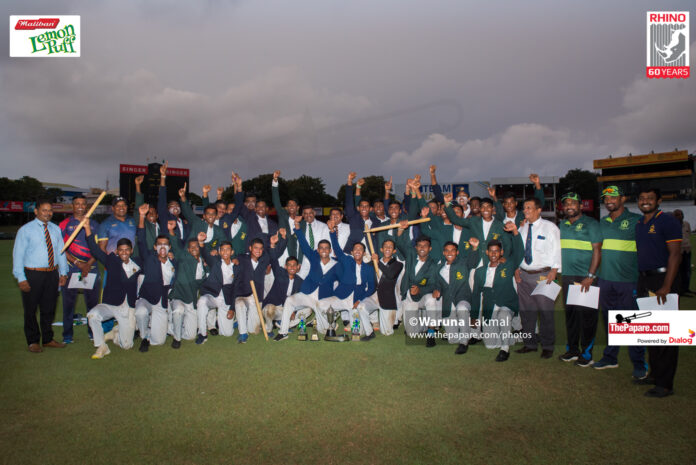 The 59th Battle of the Brothers Big Match encounter between Isipathana College and Thurstan College ended in a draw at the SSC Grounds today. Isipathana, who were on 32/1 at the end of Day 1 replying to the 1st innings total of 202 by Thurstan College, managed to notch up a total of 297/8 before declaring the innings. Thurstan, who batted for 10 overs late in Day 2, were 25/2 when the umpires called for stumps on Day 2. With this result, Thurstan College retained the Blackham Wijewardena Memorial Trophy.

Isipathana College began the day with a 171 run deficit and scored at a good run rate throughout the 1st session, even though Thurstan ace pacer Nipun Premaratne took 3 wickets. Yesith Kalupahana continued his good work from Day 1 as he pounced his way towards a well deserved half-century. None of the other top-order batters for Isipathana managed to get going until the combination of Randunu Ganganath and Yuneth Seneviratne put together a massive three-figure stand of 129 for the 8th wicket. This stand between Ganganath and Seneviratne is also the highest ever for Isipathana in the history of this encounter.

Randunu Ganganath, who compiled the best batting effort of the entire encounter, scored 6 fours and a six in his phenomenal knock of 99. Unfortunately for the youngster, he got dismissed just 1 run short of a well-deserved century. Yuneth, who complemented Ganganath with a lot of authority, scored the 3rd half-century of the day for Isipathana College.

Nipun Premaratne, one of the most talented pace bowlers who knows how to execute a plan against any batter out there, was the clear highlight of the day when it came to bowling, thanks to a hard working 5-wicket haul. There was another little spark for Thurstan College in the form of a young 15 year old left-arm spinner, who took 3 wickets after bowling consistently throughout his 16 over spell.

With just a few overs remaining, Isipathana decided to ask the Thurstanites to bat again, and just like during the 1st innings the Pathana pace bowlers dominated the opposition top order, taking 2 wickets inside the first 10 overs.

After 2 days of action, the encounter ended in a draw, making this the 48th instance a draw has taken place between these two schools. However, it is fair to say that Isipathana College ended with more honors in this annual encounter thanks to the 3 half-tons by their batters, the 5-wicket haul by Kevin Samuel and some excellent fielding, all of which was complemented well by an attacking captaincy from Thinula Liyanage.