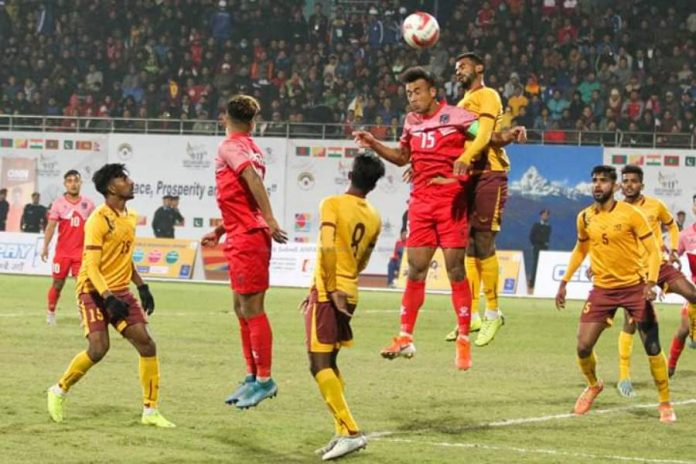 Sri Lanka U23 Men’s Football Team’s second match of the South Asian Games 2019 was played against hosts Nepal at the Dasarath Stadium, Katmandu. A Jude Suman special salvaged a draw for the Lankans as the game ended 1-1.

Sri Lanka were faced with a stiff challenge even before the ball was kicked as midfielders Aman Faizer and Sundaraj Niresh were not available for the game. Faizer due to a hamstring injury and Niresh suspended due to being sent off in the game against Maldives.

Chamod Dilshan started with the rest of the team unchanged. Nepal went out with the same outfit who thrashed Bhutan 4-0.

Lankans started way better than they did against Maldives and took the game to Nepal. They looked threatening in attack with Midfielders looking to move up in the attack supporting Dilip Pieris upfront.

The first 20 minutes of the game was full of stoppages due to injuries including Sujan Perera who came out worse for wear when he came out to smother an attacking move. An even more lengthy stoppage took place due to a blood injury of the Nepali goalkeeper Bikesh Kuthu who collided with Mohamed Shaheel.

In the 34th minute Nepal were awarded a penalty for a high foot when he attempted an acrobatic clearance and made contact with the attacking Nepali player. Sujal Shrestha converted to make it 1-0 to the host.

Shrestha could have doubled the lead in the 43rd minute when he headed over the cross bar to a brilliant cross from the right wing. Arriving from the back unmarked he couldn’t hit the target.

8 minutes of added time were played due to the lengthy stoppages as Nepal dominated play with Abhisek Rijal tormenting the Lankan defense from the right wing.

With a surprising move coach Nizam Packeer Ali substituted Naveen Jude with Sasanga Dilhara with a minute to play in the first half. At the short whistle Duckson Puslas and Mohamed Aakib both exchanged words with the Bhutanese referee and Puslas was booked for dissent.

The second half started with both Lankans and Nepal showing great intensity as both team looked to take control of the ball. Lankans were more physical in going into contact.

Lankans started to ask questions of the Nepalese goalkeeper as he was made to make a couple of saves. The Lankans kept the intensity and were committing players up front.

Dilip Pieris was then substituted with Dhanajaya Lakshan, another questionable move, as a striker was  replaced with a midfielder.

Mohamed Fazal then created a half chance for Chamod Dilshan who failed to connect at the front post.

Dhananjaya Lakshan then got into the referee’s book for persistent fouling, giving away free kick after free kick. The Nepalese couldn’t capitalize on any.

In the 83rd minute Ananta Tamang missed a great opportunity to score after a corner came his way. Unmarked at the far post, Tamang mistimed his free header and sent it wide.

Both teams got into a melee in the closing stages of the game and Chamod Dilshan was booked for pushing a Nepali player.

Sri Lanka went on the attack with 4 added minutes in stoppage time. The Lankans won a free kick outside the box and in front of goal. Suman then sent a bullet of a kick to the top right corner beating the Nepal keeper all ends up.

The home team was distraught as the Lankans came away with a point.