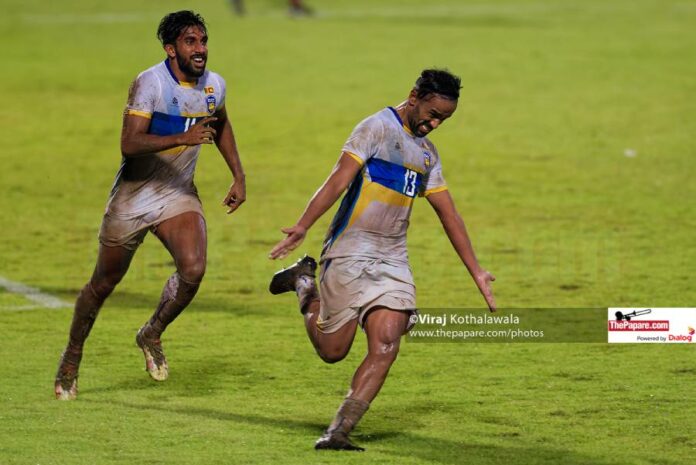 10-man Sri Lanka showed nerves of steel & grit as they fought till the last minute to secure a 2-1 win against Bangladesh and book a place in the final of the Four Nations – Prime Minister Mahinda Rajapaksa Trophy at the Racecourse International Stadium.

After losing 1-0 against Seychelles, Sri Lanka came into the game needing a win, with at least a one goal cushion, to have any chance of making it to the final while Bangladesh needed just a draw to solidify their place in the final.

Amir Alagic made three changes to the Sri Lanka side that faced Seychelles, leaving out Dillon De Silva, Mohamed Aakib and Chamod Dilshan in favour of Kavindu Ishan, Charitha Rathnayake and Sasanga Dilhara.

The hosts started off brightly in muddy conditions, creating a couple of chances – one of which was squandered by Sasanga Dilhara while Waseem Razeek shot over the bar from a tight angle after doing the hard yards.

The hosts took the lead in the 25th minute. Anisur Rahman made a diving save to deny a 30-yard effort from Chalana Chameera but the rebound was scrambled home by Waseem Razeek while falling over.

Sri Lanka lost two of their best players within minutes of each other to suspected serious knee injuries. Kavindu Ishan hobbled off soon after the opening goal while Dillon De Silva, who replaced Kavindu, lasted just a few minutes.

The joy of the goal was short lived as Duckson Puslas was sent off when he handled the ball to deny a goal on the goalline. It was a Jamal Bhuyan corner which was headed by Topu Barman. Barman, like he did a few weeks back in the SAFF Championship, stepped up to take the penalty but this time skied it over.

The visitors did create a couple of chances before half time but some desperate defending kept Sri Lanka in the lead going into the break.

With a man advantage Bangladesh did dominate play but the hosts were equal to the task up until the 72nd minute when substitute Jewel Rana scored the equalizer. It was an inch perfect cross over the defense that found Rana who made no mistake in volleying through the legs of the onrushing Sujan Perera.

The task of making it to the final was made even more difficult for the 10-men but spurred on by the partisan crowd, Sri Lanka fought hard.

They were rewarded for their persistance, as referee Mohamed Al Shammari pointed to the spot after a Saad Uddin handball, just as the match was heading over to injury time. Razeek’s penalty down the middle took a deflection off Rahman’s foot as it went in, clearing out the bench who joined in the celebrations.

Sri Lanka did have one last threat to rebuff when Barman, looking to redeem himself, headed a cross to the corner but Perera palmed it around the post. As the referee blew the final whistle, it ended a task of epic proportions where Sri Lanka played just over an hour with just 10-men to initially defend a 1-0 lead to taking back the lead after the equalizer and book a place in the final on the 19th.

In the early kick-off Seychelles drew with Maldives 0-0 to reserve a place in the final.