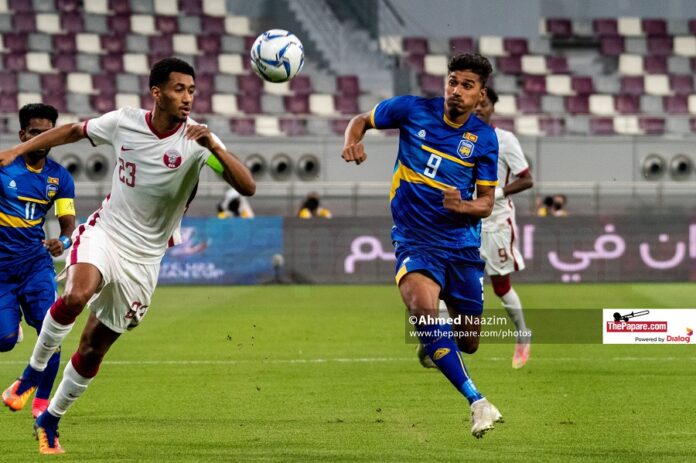 Qatar stayed perfect after beating Sri Lanka 5-0 on Matchday Two of the AFC U23 Asian Cup Uzbekistan 2022 Qualifiers on Thursday, while Yemen and Syria played out to 0-0 draw.

Qatar lead Group A with six points and only need to avoid defeat against Syria on Sunday to qualify.

Syria, on four points, will have to defeat Qatar to book the sole automatic spot to the Finals from the group while Yemen and Sri Lanka’s dreams were dashed.

Qatar took control of the match from the referee’s first blow of the whistle as they dominated possession but were unable to beat goalkeeper Gimhana as the South Asians defended in numbers.

Sri Lanka, who suffered a 5-0 loss to Syria in their opening match, defended resolutely but their efforts were undone in the 27th minute when Mohammed Mushfir brought Hashim Ali down in the box, with the Qatari defender scoring from the resultant spot-kick.

Qatar continued their command over the match after the break and were three goals up in the 54th minute when Ahmed Alganehi’s cross into the box was met by a diving header from Naif Alhadhrami.

Alganehi turned goal scorer seven minutes later when he surged down the pitch to collect a through pass before firing past ‘keeper Gimhana from a tight angle.

Qatar kept searching for more goals and got their fifth of the night when Ali slotted home from the penalty spot in the 90th minute after being brought down by Gimhana in the box.

The match got off to a frenetic pace with Yemen – having lost 3-0 to Qatar in their opener – having the first glimpse at goal with Nasser Ahmed Al Gahwashi’s long-range strike that whiffed over the crossbar by mere inches.

Syria, who defeated Sri Lanka 5-0 on Monday, should have scored in the 17th minute when goalkeeper Ali Fadhl Ahmed was out of position from an initial save, but Mohammed Malta’s effort from point blank range lacked the firepower.

Mohammed Alhallak had an opportunity for Syria in the 79th minute but his strike deflected off a teammate.

Syria upped their tempo towards the end with Aimn Akil firing their last shot of the match, but goalkeeper Fadhl denied him, leaving his side with all to do against Qatar on Sunday.