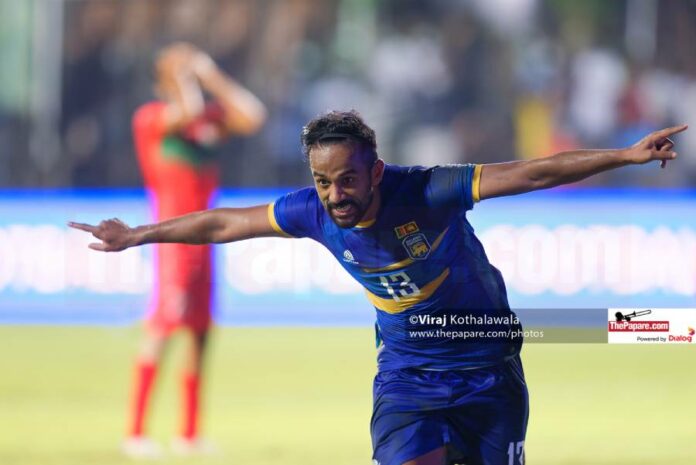 Waseem Razeek produced 4 goals in the 2nd half as Sri Lanka came from 4-0 down to draw 4-4 against Maldives in the opening game of the Four Nations – Prime Minister Mahinda Rajapaksa Trophy at the Racecourse International Stadium.

The match kicked-off amidst much fanfare with a colourful opening ceremony but the joy was short lived as Maldives opened the scoring through a looping header from captain Abdul Ghanee in the 8th minute.

A defensive mistake saw Ali Fasir through on goal and he calmly slotted past the on rushing Sujan Perera to make it 2-0 inside the first 10 minutes.

A shellshocked Sri Lanka and fans looked on as Maldives continued to dominate in the rain-soaked Racecourse grounds. With Chamod Dilshan playing at left-back, Maldives saw a weakness they could exploit. The 3rd goal came ten minutes before half time as Ibrahim Hussain danced down the left and cut back in to score past a wrong-footed Perera.

After the break things did not improve for the hosts as Ali Ashfaq added the fourth on the brink of the hour mark, making it 9 goals for him in 5 matches against Sri Lanka.

With that goal, Sri Lanka made a substitution that would turn the game in their favour. Ahamed Shazny replaced Mohamed Fazal and within minutes the hosts started an improbable comeback.

Shazny’s introduction allowed Marvin Hamilton to push forward and his interplay between Waseem and Dillon De Silva saw Waseem scoring his first. Minutes later Dillon manufactured a wonderful assist which cut through three defenders before finding Waseem, who placed it past Mohamed Shafeeu. Sri Lanka were 4-2 in the 68th minute.

Five minutes later Sri Lanka had their third. An intended cross from Dillon, from the edge of the box, took a deflection and fell into the path of Waseem, who with his back to goal, took one touch and shot on the turn past a diving Shafeeu.

Maldives looked to be out of gas as Sri Lanka piled on the pressure in search of the equalizer. With just seconds remaining in the game, they found it. An Asikur Rahuman header from a Chalana Chameera corner fell at the feet of Waseem, and just by instinct he poked it in from point blank range sending Sri Lanka into a frenzy.