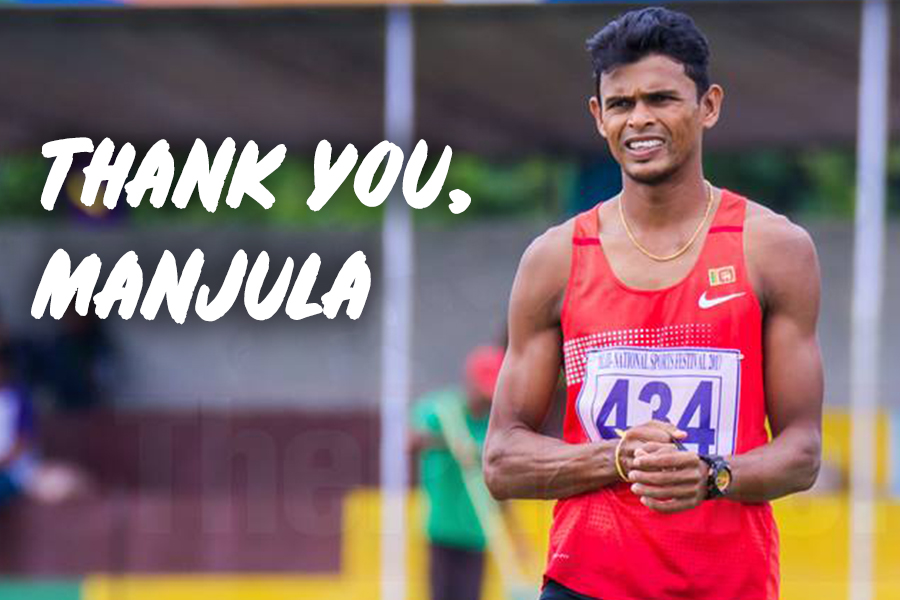 Manjula Kumara bid his goodbye to the Sri Lanka Athletics community after 18 years of incredible feats, as he officially announced his retirement amidst his teammates, fellow athletes and media last evening.

The 35-year-old National Record holder started his career very young and continued to wear the Lion on his chest for nearly two decades, taking Sri Lanka with him to the international stage.

Manjula was the Best Athlete at the National Sports Festival for 8 years while winning Gold in the High Jump event for many more. His retirement was planned a whole lot differently, the icon dreamed of bringing Sri Lanka one last medal from the upcoming South Asian Games in Nepal (1st – 10th December) but had to call it quits as fate had other plans for him.

As he is currently engaged in his higher studies in Australia, Manjula missed the local trials (National Athletics Meet) this August and thereby missed his entry to the SAG contingent. He had cleared a 2.15m at the Australian Open Athletics Meet this year which surpasses the qualification requirement of the National Sports Festival but was denied participation as the jump was not performed in an NSF recognized meet. Interestingly, the usual practice in major athletic championships is to grant automatic entry to the defending champion of the event to its next edition. However, the Sri Lanka Athletics Association has chosen not to do so on this occasion, despite Manjula reportedly making a formal request to the governing body.

With a heavy heart, Manjula has thus decided to hang up his spikes, with the disappointment of not being able to perform amidst the cheers of his home crowd.

Hailing from the outskirts of Moravaka, Manjula was the youngest of 4. He first started his sporting career as a volleyball player in his school, Kosnilgoda Junior College. With a scholarship he was able to move on to the Dikwella Vijitha College where his trainers identified his talents and directed him towards to the high jump field.

Manjula’s first All Island Schools Games was in 1994, where he won his first ever medal, a Silver, with a jump of 1.27m dressed in his blue school shorts, white banyan and nothing to protect his feet from the steaming carpets of Sugathadasa.

His big break came in 2004, as he managed to become one of the very few who tasted the Olympic dream, being selected to compete at the Athens Olympics. From there on his career only took off to higher and better standards.

Speaking at the media conference, Manjula fought back tears while announcing his retirement.

“This is a really difficult decision for me, I wanted my retirement to be with a medal from the National Sports Festival. But unfortunately, that was not meant to be. This decision was taken within 24 hours of this announcement”.

He is a degree holder in the world of Economics and has studied Sports Science in Australia, where he is currently residing. After his retirement, he will return back to continue his higher studies.

“I will be heading back to Australia after this, but I don’t wish to end my sporting career completely with this. I want to come back as a trainer and give back to the sport. I also have hopes of modeling a player who can one day bring Sri Lanka an Olympic medal” opined Manjula on his future endeavors.