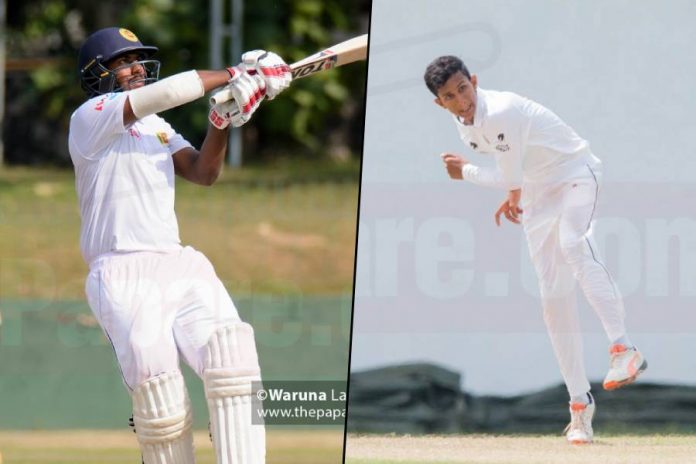 The quarter finals of the SLC Major Emerging Tournament 2019/20 got underway yesterday, 12th November. Colombo Colts Cricket Club defeated Air Force within two days into the game to reach the semi-finals while Army CC and Navy SC, Chilaw Marians CC and NCC, SSC and Tamil Union C&AC are all battling it out for the remaining 3 spots.

Winning the toss and batting first, the Airmen only managed 104 runs for the first-innings. Top-scorer was the opening batsman, Shabiq Ifthary, who made 47 runs up front. But the entire Air Force batting unit found the left-arm spin of Praveen Jayawickrama too much to handle as he went off with a fifer in the first innings.

Coming out to bat, Right-handed basher from Moratuwa, Avishka Fernando scored a swashbuckling ton to put his team well ahead in the contest. He was supported with a vital contribution from Heshan Dhanushka who made an anchoring 62.

In their second lease, Kanishka Madushan held the innings for Air Force but he didn’t receive enough support from the other end as Air Force went down once again for 176 runs. Maduahan made a valiant 71 runs.

It was once again Praveen Jayawickrama who did major damage to Air Force SC bagging 4 wickets for 81 runs. Colombo Colts CC recorded a handsome victory by an innings and 31 runs.

In the other 3 quarter finals, which will be worked off for day-three tomorrow, Army Cricket Club is Fighting Navy Sports Club at NCC grounds, Chilaw Marians Cricket Club is playing Nondescripts Cricket Club at Colts grounds and Sinhalese Sports Club is locking horns with Tamil Union Cricket and Athletic Club at Marians grounds.

Army CC who were inserted to bat first saw a struggle upfront, being dismissed for 139 runs. But they fought back and got themselves into the game by getting rid of the sailors for just 93 runs. The game is hanging now with Army CC on 117 for 6 at close of play on day-two.

At Colts grounds, Marians put on a mountainous first-innings score of 323 runs with the former youth national cap Lasith Croosepulle striking a magnificent hundred on day-one. NCC replied with 221 runs trailing behind the boys from Chilaw. The game could go down to the wire if the NCC lads manage to get rid of the Marians within the morning session tomorrow as they were at 95 for 8 at stumps.

It was another interesting game of cricket at Katunayake as SSC who slipped to 121 runs in the first-innings came back strongly into the game by restricting the Tamil Union team for 152 runs and piling up a massive 314 runs to set an imposing target of 284 runs. Tamil Union were at 96 for 1 by sunset on day-two.