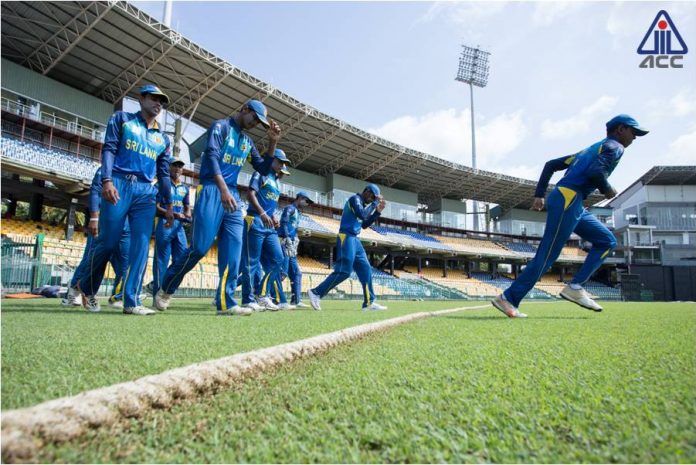 Two games of the ongoing U19 Asia Cup were held in Colombo and Katunayake today, 6th September, where Sri Lanka started off their tournament playing against Nepal while Bangladesh took on the UAE U19 squad.

Yet another rain-spoiled game which lost 8 overs from each sides quota. Nepal won the toss and opted to bat first despite the R. Premadasa surface being under the covers for a large part of the morning.

Opener Rit Gautam gave Nepal a good start as he led their batting with a painstaking half-century. Skipper Rohit Paudel added another valuable 47 runs to the teams’ total as the boys from the ‘Roof of the World’ were restricted to 159 runs for the loss of 9 wickets in their allotted 42 overs.

It was the extra pace from the left arm seamer Dilshan Madushanka that ignited the disruption of the Nepal batting. He was well supported by left-arm spinner Navod Paranavithana who also went back with 3 scalps.

From soft-ball cricket to youth internationals, the tale of Dilshan Madushanka

“It’s a small town, nothing special about it.” This is what Dilshan Madusanka had to say about the….

The home boys were given a revised target of 158 runs in the same number of overs. Even though the top order did not fire right in a simple chase, they caught up soon as the Royal boys Kamil Mishara and Ahan Wickramasinghe combined to put up a 50-run partnership.

Mishara departed for a well-made 55 runs who was soon followed by Wickramasinghe who ended his knock with 30 runs to his name. The end bit of work was done by Mr. Reliable of the team Avishka Tharindu who remained unbeaten on 25 seeing his team home.

Right-arm paceman Rashid Khan was the pick of the bowlers with 2 wickets for 21 runs.

Bangladesh U19 vs United Arab Emirates (UAE) U19

Bangladesh U19 and UAE U19 too got their Asia Cup campaign started at Katunayake where Bangladesh U19 recorded an effortless victory over the boys from the middle-east.

The game was shortened to a 45 over affair in which Bangladesh won the toss and invited UAE to bat first only to get them restricted for 127 runs in 28 overs. Osama Hassan was the man who kept the innings alive for UAE as he struck 58 runs. Tanzim Hasan Sakib and Rakibul Hasan shone with the ball for Bangladesh as the duo ended with 3 wickets each.

Bangladesh chased down the target in just 21.3 overs with 6 wickets intact. Tanzid Hasan top-scored with 45 runs while Rishabh Mukherjee was the pick of the bowling for UAE with figures of 2 for 27.

Bangladesh U19 won by 6 wickets