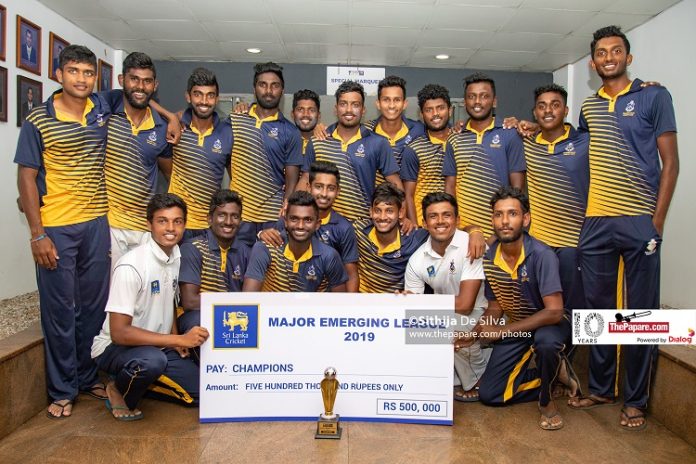 The 3rd and last day of the SLC Major emerging club Cricket tournament final was conducted today (26) between Chilaw Marians Cricket Club and Colts Cricket Club at the R. Premadasa Cricket Stadium in Colombo. Colts who managed to secure a first innings win, emerged as the champions of the tournament.

In reply to Chilaw Marians’ 143, Colts CC started their day on 250/3 with half centurions Jehan Daniel and Vishad Randika who were on 83 & 62 respectively. The pair couldn’t last long on day 3 and the rest of the batting line-up followed them to the dressing room quickly, adding only 66 runs to the overnight score while losing 7 wickets.

Sri Lanka national cap Asitha Fernando was the chief destroyer of the Colts innings as he picked up 5 wickets while he was well-supported by right arm seamer Nimsara Atharagalla who chipped in with 4.

With an advantage of a 173-run lead from their first innings, Colts managed to take down 6 wickets in the Chilaw Marians 2nd innings and looked very much in for an outright win before the rains brought the match to an early end.

Chilaw were 153/6 at the conclusion of the game, still needing 20 more runs to make Colts bat again. Dilshan Sanjeewa played a patient innings to rack up an unbeaten 50 before play was stopped.

Colts CC was announced as the champions of the SLC Major Emerging tournament 2019 as they managed to win the first innings of the final.