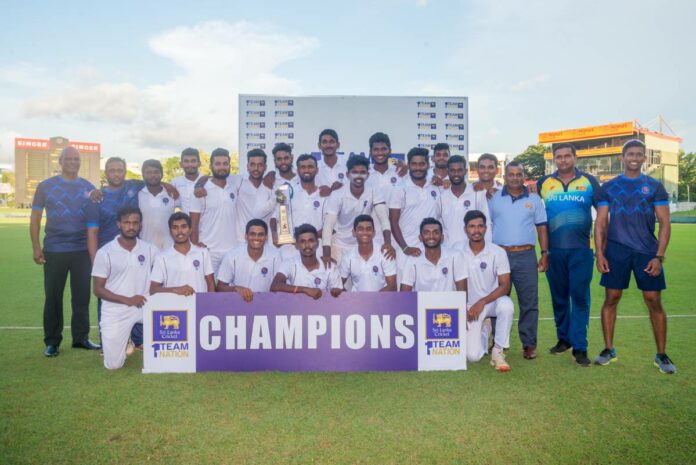 The overnight batting pair of Santhush Gunathilake and nightwatchman Dilum Sudeera started off the day for Tamil Union on a positive note as they put up a 57-run stand for the 4th wicket helping their team set a competitive target of 211 for the Sebastianites, whose only chance of winning the final was by completing an outright win as they had already faced a 1st innings defeat.

Chasing a title win, the Moratuwa club succumbed to Dilum Sudeera’s spin once again as he claimed yet another 5-wicket haul to finish the tournament as the highest wicket-taker with 52 wickets in 5 matches. It was the wicket-keeper batter Vimud Sapnaka who top-scored for Sebastianites once again with 52 runs, it was just the 2nd half-century of the game in which no centuries were scored.

As spinners dominated the wickets chart for both teams, Sudeera with 12 wickets and Tharindu Ratnayake with 9 wickets for Sebastianites, Manelker De Silva produced a brilliant spell of medium-pace bowling for Sebastianites claiming 5 wickets in the 2nd innings, which eventually went in vain as they had conceded too many runs.

The individual awards were as follows,