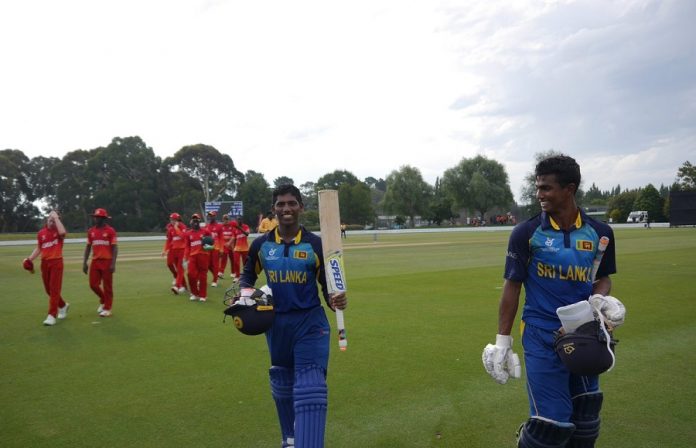 An unbeaten century from Moratu Vidyala (MMV) wicket-keeper batsman Nishan Madushka (109) guided Sri Lanka into the Plate final of the ICC Under 19 World Cup to be played on 28th Sunday; they await their opponent in the Plate final as West Indies square off against Canada.

After winning the toss and batting first, the Lankan juniors got off to the best possible start dismissing opener Wesley Madhevere LBW for a four ball duck. However, from then on it was all Zimbabwe as the Africans ran away, scoring at a rapid rate.

Right handed opener, Donald Mlambo, along with Jayden Schadendorf went on to put on a 75 run stand for the third wicket as Zimbabwe seemed to take the game away from the Lankans.

Mlambo was the next to be dismissed for 52 off 104 balls with 4 fours, however, Schadendorf continued on his merry way, scoring freely.

Pakistan were made to work for their 3 wicket win beating..

Jayden Schadendorf (74) finally fell prey to Thisaru Rashmika (2/58) as he picked up 2 out of the 4 wickets to fall.

Milton Shumba and Zimbabwe captain, Liam Roche held firm till the end of their allotted 50 overs, finishing the innings on 259 for the loss of 4 wickets.

Coming out to chase the decent score, Sri Lanka U19s got off to a horrible start as Dhananjaya Lakshan and Hasitha Boyagoda, the record breaker from the Plate Quarterfinal, were both dismissed for a total of 4 runs.

Jehan Daniel came and went for 6 runs as Sri Lanka were reeling at 31 for the loss of 3 wickets within 6 overs.

Moratu Vidyala right hander, Nishan Madushka and Nuwanidu Fernando joined together, putting on 143 for the 5th wicket after the demise of captain Kamindu Mendis for 17 runs.

Madushka went on to surpass the 100 run mark as Fernando was dismissed for a well-played 68 off 79 balls which included 8 boundaries. Ashen Bandara came out to bat with the Sri Lankan score on 208, needing a further 52 runs with 10.5 overs remaining.

Bandara came to the party with a brisk 38 off 26 balls with 6 fours as he powered his team to victory along with Nishan Madushka as the right hander ended with a valiant 109 off 135 balls which included 9 fours. 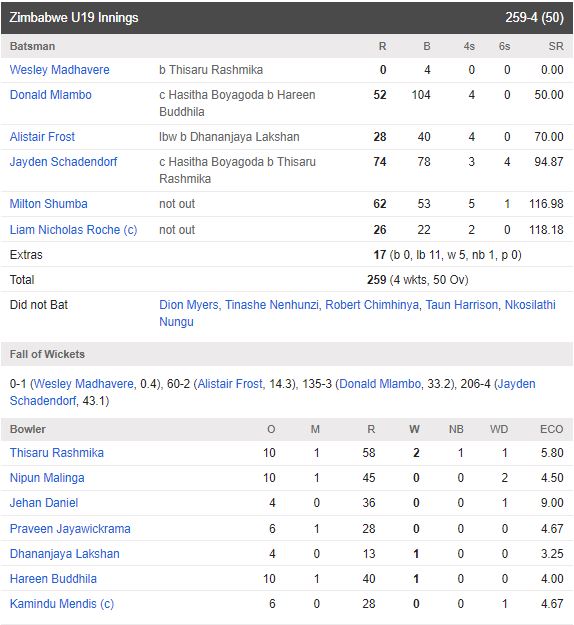 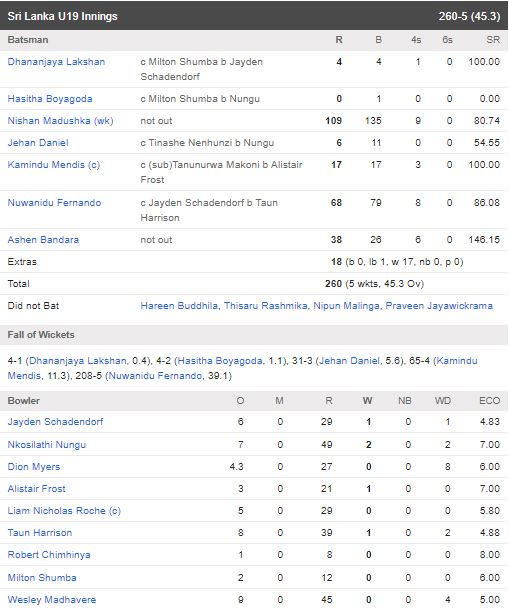