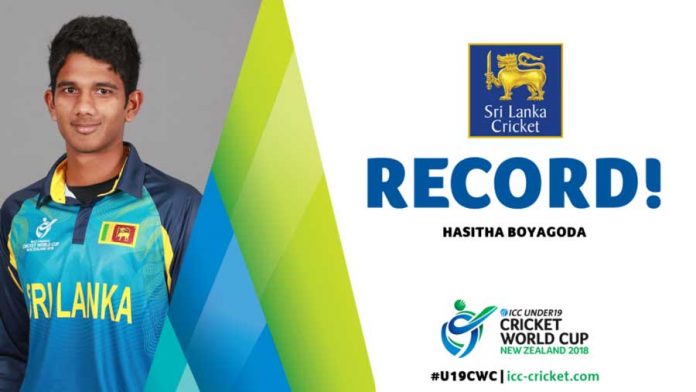 Pakistan were made to work for their 3 wicket win beatinG…

Trinity College, Kandy captain Boyagoda who was benched for two crucial group stage matches against Pakistan and Afghanistan sent a perfect message to the selectors smashing 191 runs off 152 balls with 28 fours and 2 sixes.

Sri Lanka won the toss and elected to bat first. Boyagoda and Dhananjaya Lakshan got the islanders to a stunning start adding 87 for the opening wicket. After Lakshan’s dismissal, wicket-keeper batsman Nishan Madushka joined Boyagoda as they cruised to a 147-run second-wicket stand. 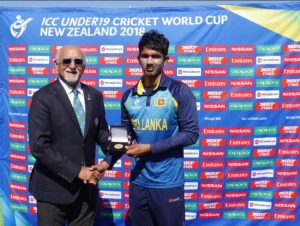 Madushka made 60 off 58 deliveries while Jehan Daniel who came in at number four kept the momentum going scoring a 24-ball 37.

Boyagoda’s excellent knock was inspired by pure timing and placement, especially through the off-side. Boyagoda broke New Zealand batsman Jakob Bhula’s record for the highest score in an Under 19 ODI, made just six days previously against the same opposition.

Boyagoda fell in the 45th over with the score on 339 but skipper Kamindu Mendis and Nuwanidu Fernando smashed 53 and 35 respectively to post the fourth highest U19 ODI score and Sri Lanka’s highest, 419/4 in 50 overs.

In reply, Kenya U19s were bowled out for 108 as St. Aloysius’ College left-arm spinner Hareen Buddhila who did not play any games in the group stages picked up 4 wickets for 27 runs in his full quota of 10 overs.

All the other bowlers chipped in taking a wicket each while seamer Nipun Malinga grabbed two scalps. This is joint-second biggest victory in U19 ODI history.

Sri Lanka will take on Zimbabwe in the 1st Plate Semi-Final on 25th January, (Thursday).