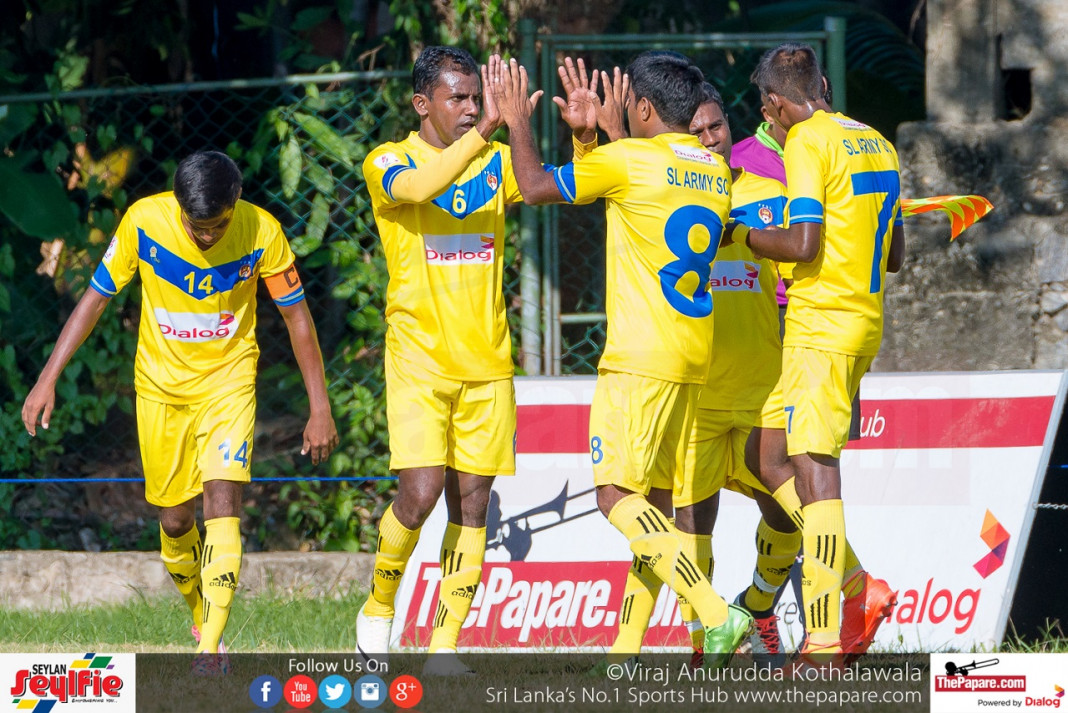 Army survived a thrilling Colombo FC comeback from 2-0 down to 2-2 but Mohamed Issadeen completed his hat-trick to book Army’s place in yet another FA Cup final, winning 3-2.

The Soldiers stormed to a 2-0 lead within the first half hour, only to be pegged back by a stunning Dilan Kaushalya brace, before Issadeen nicked his third from close range to ensure that the Soldiers booked their place at the Sugathadasa stadium next Saturday.

The Soldiers came into the game as favourites on the back of a 12-1 win over Super Sun in the quarter finals while Colombo only managed to nick a 1-0 win over Air Force.`

The Soldiers lived up to their tag as favourites as they dominated the early exchanges of the game straight out of the blocks. Colombo FC came into the game with star man, Zarwan Johar, on the bench and this allowed Sanka Danushka, Madushan De Silva and Punsara Thiruna the license to thrill as they controlled the middle.

In a pedestrian game, Army managed to take the lead midway through the first half as a teasing ball was sent in by Roshan Appuhamy from the left following his barraging run through the middle. The cross fell perfectly in between the defender and the keeper and Isaadeen timed his run perfectly to head home.

A few minutes later, Mohammed Ramees misread the bounce of the ball off a cross from the right and headed on to his arm, resulting in a penalty. Issadeen stepped up to fire home, putting Army in the driving seat.

Colombo responded by bringing on Zarwan to try and change things, but the scoreline remained the same till the half time whistle.

Colombo FC came into the second half in a more attacking fashion, taking a few more risks in search of a comeback. The team pushed forward in waves, dominating the middle of the park, similar to how their opponents did in the first.

Midway through the first half, the game really came to life when Dilan De Silva fired home following a fumble in the 6 yard box. Following a cross from Siraj, Danushka Madushanka tried to flick, but his missed attempt resulted in the ball ricocheting off the defender and falling to Dilan for the winger to fore home.

Following a sustained attacking period, Colombo managed to pull a second goal out of nothing when Dilan whipped in a cross from the left, only for the ball to swirl in the wind and fly goal-wards, catching goalie Nilantha Kumaa by surprise.

As the Colombo side were pushing for a winner, the Soldiers managed to nick one against the run of play after Thiwanka Chandrasekara’s header was turned towards Mohideen via a brilliant save by goalkeeper Imran. Issadeen made no mistake from 6 yards, completing yet another hat trick.

Colombo nearly pulled a leveller at the death, but Nagur Meera turned Zarwan Johar’s corner just wide to put Army SC through to yet another FA Cup final.