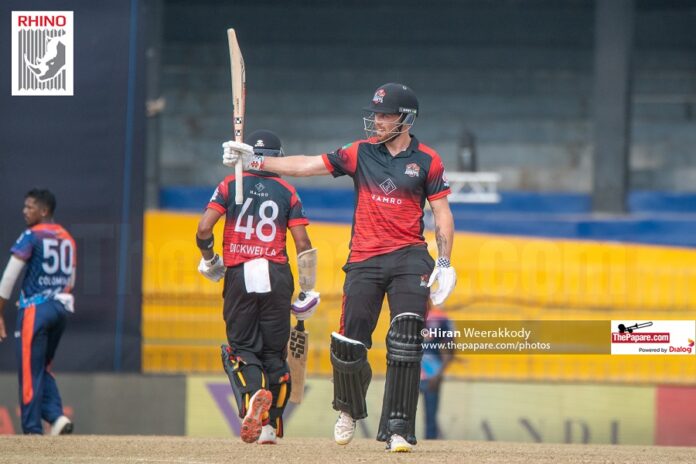 Ramesh Mendis and Phil Salt starred for the Dambulla Giants, as they beat the Kandy Warriors by 20 runs in Match 2 of the Lanka Premier League.

Welshman Salt followed up his brilliant form from the Abu Dhabi T10 league, where he finished as 2nd on the run-charts, with an explosive 64 off 27, including 5 sixes and 4 fours. The right-hander provided just the impetus the Giants needed at the beginning of the innings, smashing Lahiru Kumara for a 6 and 4 in the 2nd over of the game and then doing the same to Asela Gunaratne in the next.

Niroshan Dickwella, returning to competitive cricket for the 1st time since the Durham bubble-breach, played some of his more characteristic shots on the way to 37, putting on 74 in the powerplay and 97 in total alongside Salt for the 1st wicket, in just 7.4 overs.

Despite having the early momentum against a flat looking Warriors bowling attack, the Giants couldn’t make the most of it as they lost wickets at regular intervals to finish with 190/7, that too thanks to some late boundaries from Ramesh Mendis.

The Giants seized hold of the game in the powerplay, reducing the Warriors to 28/3 inside 4 overs. Angelo Perera and Rovman Powell (42 off 21) struck a few boundaries, but it was never going to be enough chasing 191.

Mendis was the star with the ball, picking up the danger men Charith Asalanka (in the powerplay), Perera and Kamindu Mendis – the latter two in the same over, basically ensuring the result in the Giants’ favour.