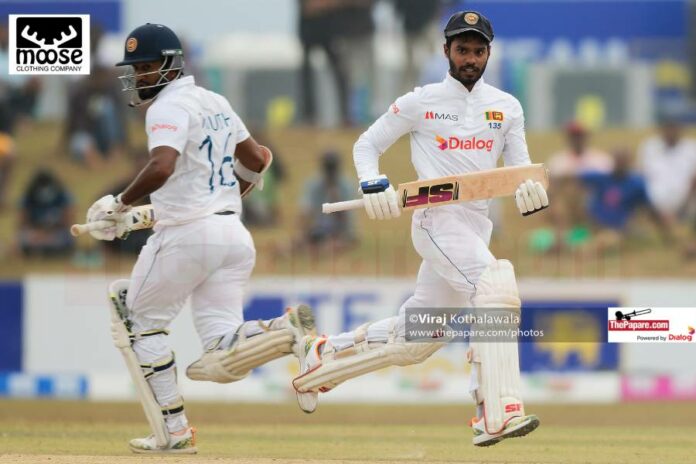 Sri Lanka managed to extend their lead to 323 runs at the end of day three in the second Test match against Pakistan at the Galle International Cricket Stadium on Tuesday.

Pakistan, after being 191 for 7 overnight, were bowled out for 231 as off-spinner Ramesh Mendis picked up his third five-wicket haul in Test cricket. With a first innings lead of 147 runs, Sri Lanka ended the third day’s play on 176 for 5.

When play was suspended due to bad light at 4.17pm (local time), Dhananjaya De Silva and Dimuth Karunaratne were unbeaten on 30 and 27 respectively.

Earlier, Sri Lanka’s task of removing the last three Pakistani wickets was somewhat delayed by Yasir Shah and Hasan Ali as they added 32 runs whilst batting for 14 overs in the morning session.

Left-arm spinner Prabath Jayasuriya cleaned up Hasan Ali to claim his third wicket and give Sri Lanka the much-needed breakthrough. Mendis got number 10 batter Nauman Ali caught behind and Yasir Shah LBW as the hosts gave away only 40 runs to the Pakistan tail. Mendis ended with figures of 5 for 47 and Jayasuriya took 3 for 80.

All the Sri Lankan batters in their second essay got some starts but they failed to convert those into big ones as Pakistan managed to get back into the game by taking regular wickets.

Due to Karunartne’s back injury, Niroshan Dickwella opened the batting with Oshada Fernando. They managed to bat well until the lunch break. However, in the post lunch session, the home team lost four wickets.

Dickwella played one away from his body as Naseem Shah managed to find the outside edge to a delivery which was angled across the left-hander. Afterwards, Yasir Shah trapped Fernando plumb in front for 19 before Kusal Mendis completely missed the ball whilst playing a sweep off Mohammad Nawaz.

Playing his 100th Test, Mathews looked good in the middle accumulating runs with ease. Against the run of play, Mathews was given caught behind off Agha Salman as the snicko showed the faintest of edges. The Sri Lankan batter walked off shaking his head as he was dismissed for 35.

In-form Dinesh Chandimal edged behind after the tea break for 21 as Naseem Shah picked up his second scalp for the day. Skipper Karunaratne came in at number six to bat with his back injury and he along with vice-captain Dhananjaya De Silva took Sri Lanka’s lead beyond 300 runs. They have added 59 runs so far for the sixth wicket.