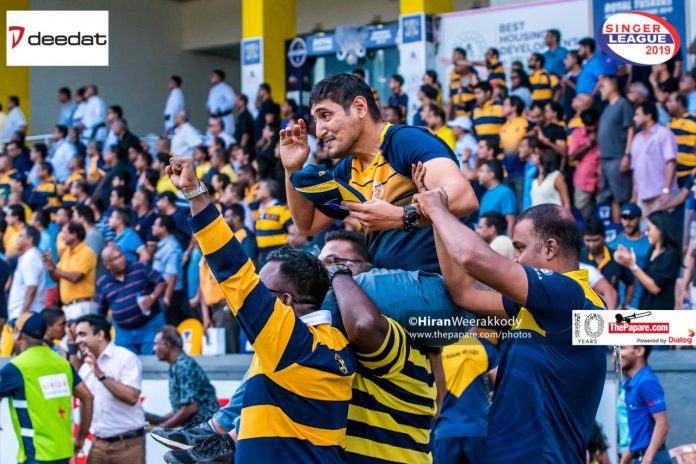 If you watched the last of the Jurassic movies, I want you to cast your mind back to that epic end scene. It is graphic, PG rated for violence and quite stunning. That’s right, the scene where a Raptor, putting up a fight is simply gobbled into thin air, as a Mossasarus arrives from the oblivion and takes it whole, in a single mouthful. All that noise, shrieks and hot air– drowned out with one brutal swallow. Followed by an eerie silence.

That’s how it all panned out in a fate which befell St Joseph’s. There were hysterics and moments of resistance but in a four try blitz (and potentially another 4 gone begging), they were eventually silenced like extras on a Bollywood movie set. Eventually. 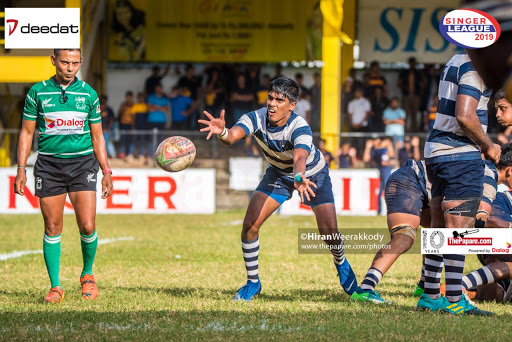 Royal, enjoying almost 80% possession, showing an almost compassionate amount of inaccuracy (from a few set plays, kick returns and crucial knock ons)– seemed like they were interested in keeping St Joseph’s in the game. Eventually, like the good dinosaur type, when the time was right and with one thrash of the tail put their foes away with disdain. It had a ruthlessness blended with cherubic empathy.

Four tries and a bonus point is all they required and in the end, they got home at home– with some nerves to deal with. Finishing what was an entertaining season which was won, half a furlong from the winning post.

A very dominant set piece, where only their own mistakes/crooked throws and unforced errors allowed the Darley road school to stay afloat. It was chalk and cheese, where at times Joes looked lost in transit (on their own throw) and resorted to under 8’s style, tossing the pillow. It looked all very wrong and mind-boggling.

The defending champs, playing to a side to side and ruck recycle pattern of 2-3-3-2 there were moments of pure bliss, where Royal covered their own turf and broke the gain line at will. You could only sit back and admire. This was even despite their back division forming 9 men deep and attacking from way behind the gain line.

Underpinning that coach Dushan Lewke was head and shoulders above everyone else, marshalling his Tyrannosaurus Rex, like Indiana Jones would have on a saddle fitted with a bridle. It was a commandeering performance.

Now then, without any further ado, let’s look at five footnotes from this epoch making weekend clash.

If you would have listened to my commentary of the Bradby shield and how well Royal emphasizes their ball placement, this game was no different. That being, when they go in for contact and create a ruck– how they present ball for their half back. It is so impeccable, as the ball carrier held in a tackle goes down and places it “like a lotus offered at place of worship”.

That is how much value and care they have for a Gilbert rugby ball. It then correlates to swift service and distribution. The pillar of their success and ability to move the ball to a direction they desire. Even though their backs are not as potent as most other schools, the quality is AOK and makes up for any such lack of X factor. It is always, front foot-ball. 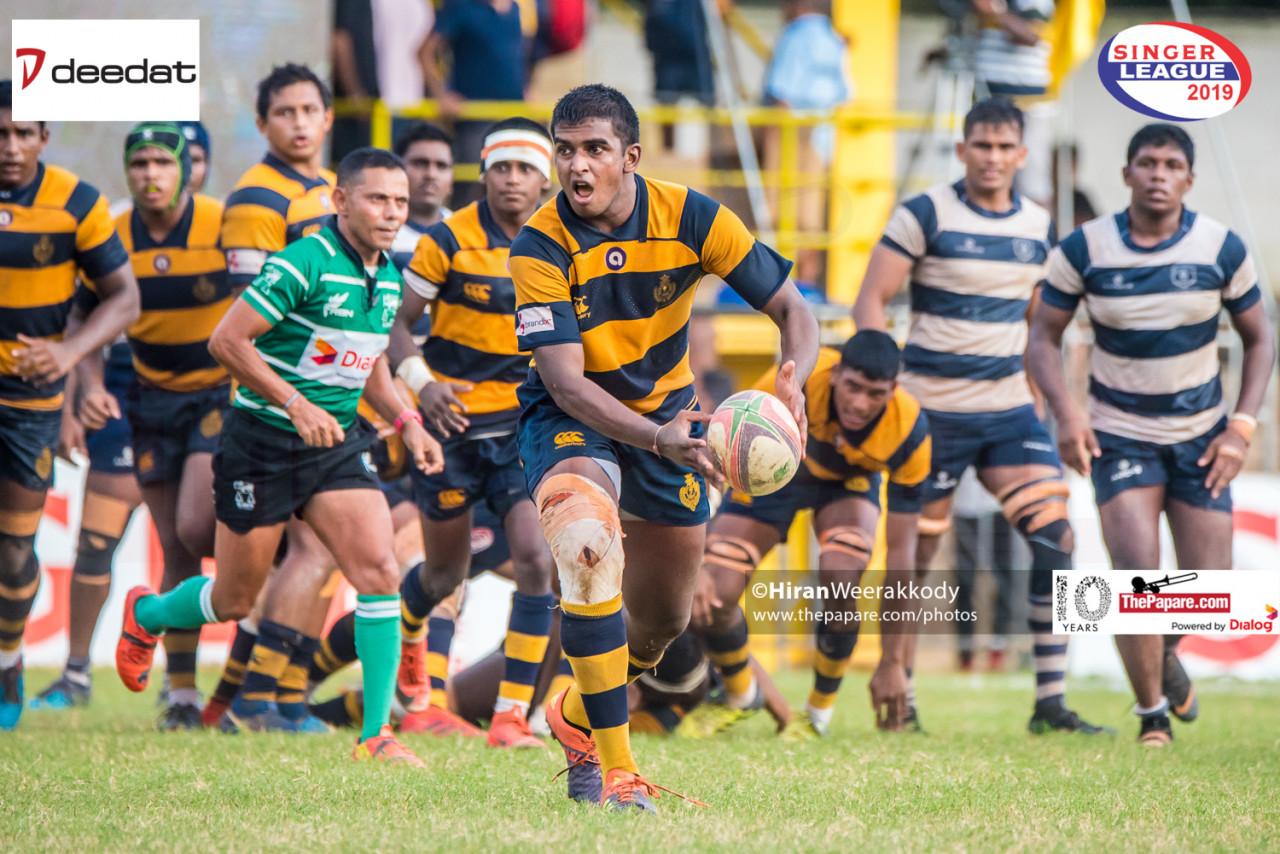 It is a coaching masterclass and a result of thousands of such placements at training. Hard work they have done and mastered.

Moral of the story– if you want that outcome of great ball, be prepared to do the work and go through that process. It’s no country for the weak or lazy minded.

Read more: The Revenant at the Bradby shield


2.Set piece versus a set gone to pieces

In the modern game of rugby you MUST win your line out. In school boy 1st XV grade this is even more paramount, as it is the only genuine contestable set piece.

Pre game in my analysis and win predictor versus playing patterns, my dominant hypothesis was that Royal would look to set and reset by pushing for line outs. Well, that is exactly what happened and they were even happy to concede some ground knowing they can spoil the opposition throw. As the game progressed, that “throw” started to become a pillow toss.

Whilst Royal were on their own in an aerial pursuit, the saints looked lost and were having a nervous breakdown on their own throw. Fearing they would get turned over as their confidence took a severe hit, it was simple toss to the first man they resorted to

When I see this sort of disruption, my mind goes straight into training week. Based on the numbers and what unfolded, it would have been better for the Blue and White brigade to have just played touch rugby all week and skipped their line out training altogether. Because, whenever they were on fast break and spun it wide, points came from almost nothing. Royal to their detriment, when they decided to kick and invent broken play, invited Joes right into it. That is a facet they are on a hiding to nothing.

In a clear cut case of broken versus set play, the Royalists ruled with their set piece as their opponents looked like a broken movie set.  They just couldn’t find their pieces. 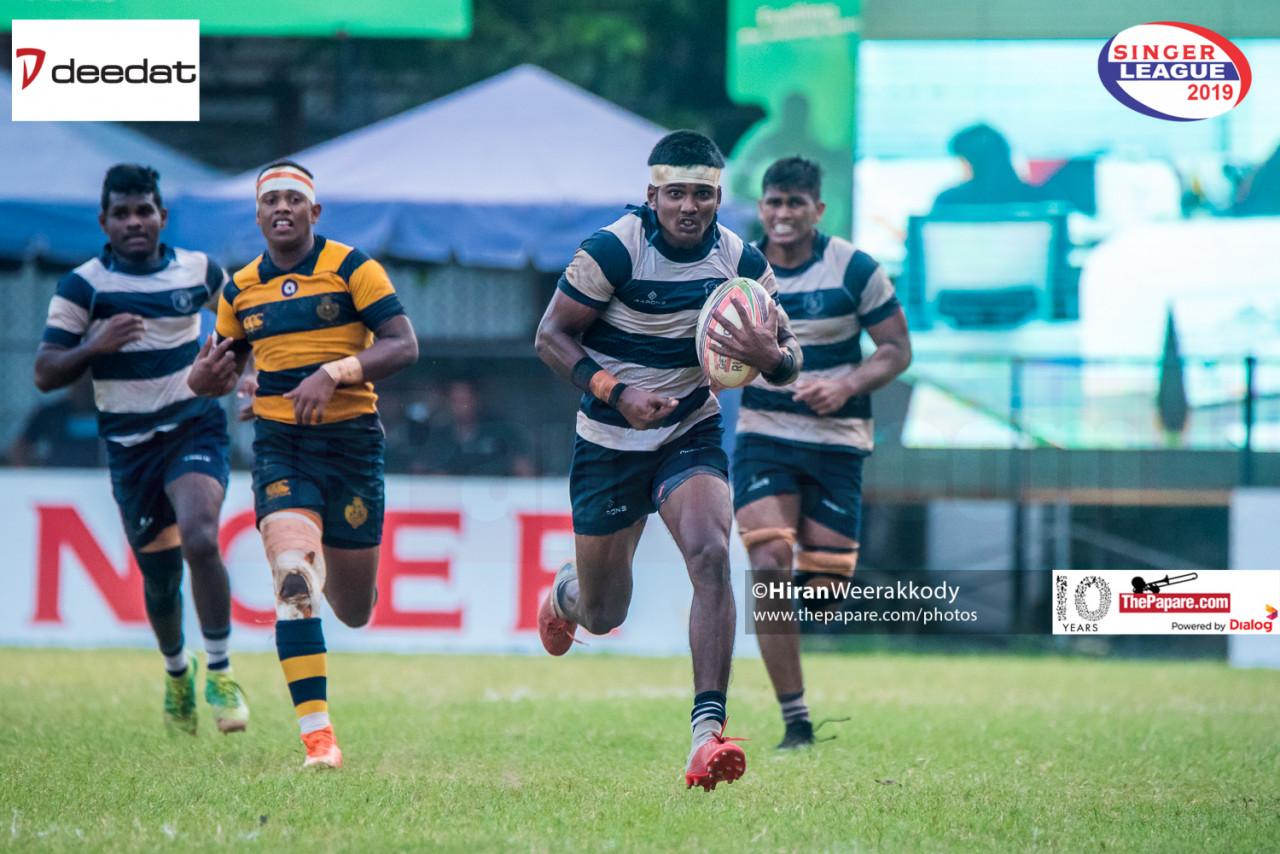 One week ago when the saints derby was decided on the very last play, it was Josephian star winger, Maduranga– who plays in the midfield, getting all the attention. It was unfortunate as in my view, he was out of position and found out for a skill he doesn’t possess, carrying in the mid field for an exit option. Furthermore, in my previous video segment I made this very clear and it wasn’t his doing. It was a terrible tactical read and a core-coaching issue.

Keep in mind, these are amateur school boys. He is no exception.

Anyhow, fast forward seven days and he starts on the bench. A possible penalty for that last moment of failure. A somewhat cruel and unfair situation but that was the way it played itself out (or at least that is my read on it). Moreover, having the wheels to motor outward and given Royal’s obvious defensive weakness out wide, it bemused me even more as to why he didn’t start on the wing as opposed to the bench.

4.The day of the jackal is fading? 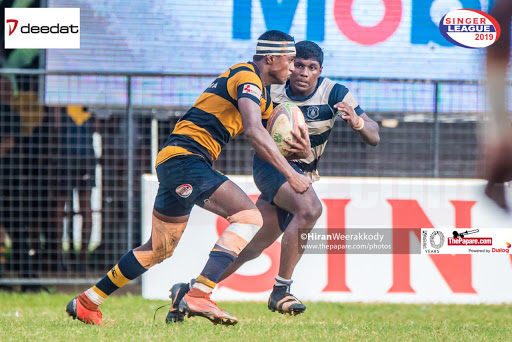 In a game of cat and mouse, the Royal back rowers and namely, man of the match Achitha Radeeshan was all over the breakdown. It was like a bad rash engulfing an infected goat’s skin. He and his forwards were constantly pressuring tackled players and contesting the ball. Relentless hustling and as a former back rower myself, loving it.

It was a shame and maybe, the day of the jackal is fading?… or was it that, it just wasn’t on that Saturday? Food for thought. That said, the referee was brilliant in an area where he did allow the contest to carry on, giving Royal a longer rope and not overly penalizing them where they didn’t hang themselves by not releasing the tackled player. It did, in the last quarter make for compelling viewing.

No surprises here. We got it bang on and with a week to spare. Pre game, my #straightup video segment carried the full prediction for the game. For those of you who missed it:

Royal to win by scoring 4 tries and get the bonus point. Do I need to say anymore? –bottom line, my analysis and predictor has been on fire all season. An alarming drift in form from Joes, where I called their loss to Wesley to a pinpoint accuracy (5 points and under), made it very predictable as to how they would fumble against Royal.

#stats_pert does not lie and the numbers were spot on. Yet again. Do watch this space as I tip you next weeks Lotto numbers and powerball. You are very welcome.

Hero of the day:

The Royal front five. In a devastating show of force and skill they out muscled and did what was needed to win. Getting into the hard yards and grind, they were the foundation of this team’s success. It was an utter mismatch against their counterparts and only Royal’s 32% overall ball handling v unforced error rate denied more points. A five star rating and one which deserves a google review, if you could give them one. 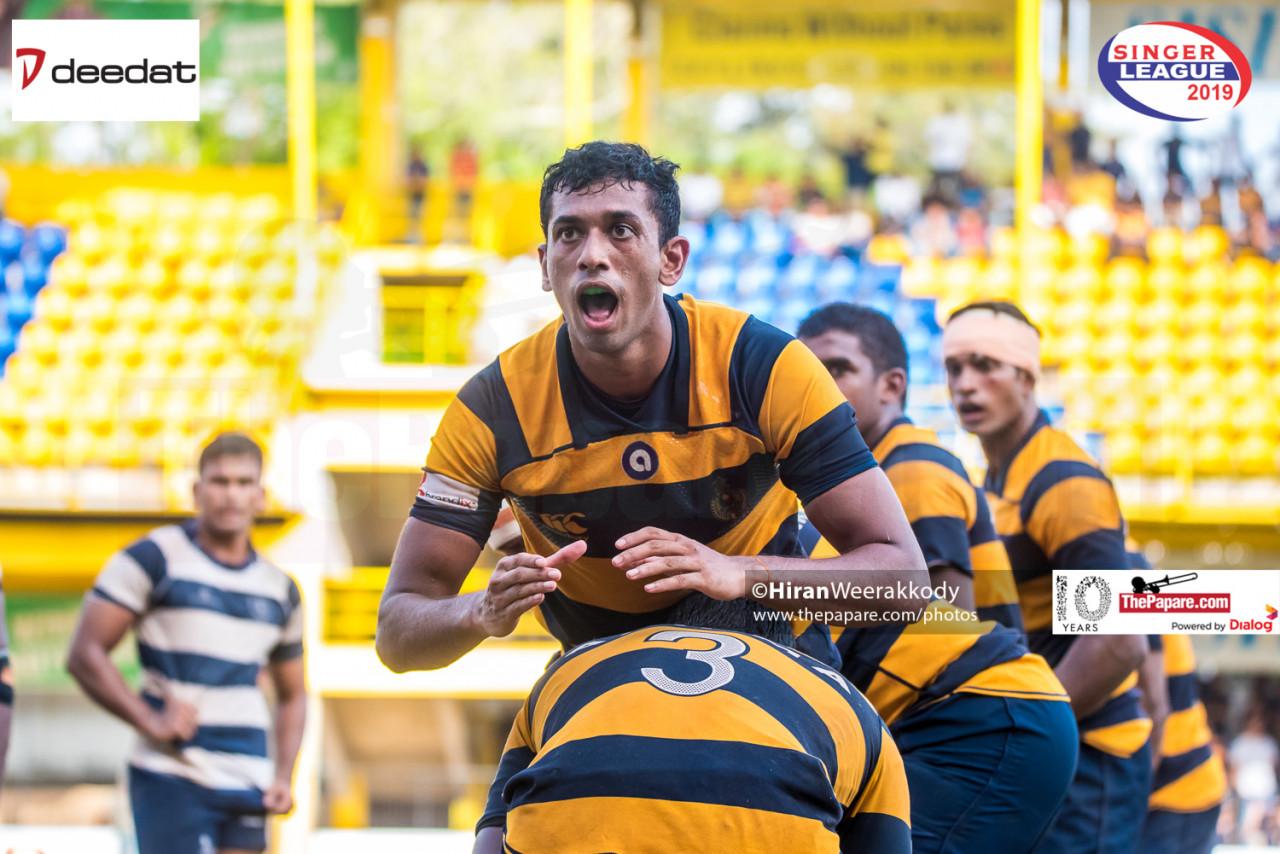 That driving, fish-tail maul– yes, let me coin it as the “Mosasaurs”. When it got going, despite desperate and illegal attempts of blue and white jumpers to sprawl all over the floor, it just maintained its bind and kept rolling forward. A horrifying proposition for the opposition.

You know what’s coming but it’s only a matter of time when Royal “Mos” it over.

The Josephians tried the no contest method but clearly, they had no clue and a lack of correct preparation cooked their goose. In all fairness to them, there isn’t much you can do apart from the one time they sacked it straight away. That, I suspect was more by accident than design.

Whilst winning three on the trot in NOT unprecedented, in the modern era where schoolboy rugby is almost fully professionalized, it is an incredible feat. Unparalleled.

The Thomians of 89-91 and Pathana of 95-97 in the recent era have completed this trifecta. That said, with the greatest amount of respect to these wonderful sides, it is an unfair and invalid comparison to this decade. The sheer level of competition and resourcing by (almost) everyone in it has jumped ten fold. So any notion of pre-historic talk from another jurassic age, in my view is dribble.

Just like how the T-Rex was genetically modified to create a super- hybrid beast in the movie, what and how Royal did in the last 24 months is a testament to their skills and ability. Nothing or anyone comes close to it.

Doing what was asked of them and in the form they did, the result was comprehensive. Whilst others hoped for success, they went out and did it. The only way they know. Scoring 4.33 tries average per game.

Given the money, payouts, focus on full-time training schedules and lateral hiring strategies, the only thing missing in this form of the game is cloning and genetic engineering. I am fairly sure, at this rate– that day is not too far off the mark.

Royal were utterly dominant in and almost two thirds of a shut out. Their much rated opposition looked all at sea and had no thought pattern to counter an avalanche of ruck recycling and side to side movement. They were jabbed, upper cut and picked apart for large periods in a game where the final scoreboard, flattered the vanquished.

So, enough said. The Indominous T-Rex rules the roost at Jurassic Park, can you hear the deafening roar? Still?. I can, all the way here across the globe. They just upgraded from J-Park and created their own Jurassic world.

“We enjoy the rugby we play” – Nigel Ratwatte Kandy SC

Video – “We played as a team” – Fazil Marija